Hazing is not just a college problem, it’s a cultural problem as well 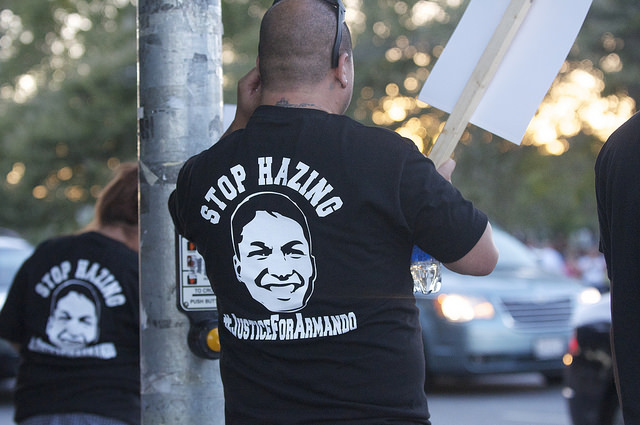 Demonstrators rally at CSUN in support of Armando Villa, a student who died during an alleged hazing incident. Villa's story is not new, as hazing has always been a dark part of our culture that happens to many in their daily lives. Photo credit: Jonathan R. Diaz/Live News Editor

Hazing has become a word all too familiar with humiliation and binge drinking. This is largely due to the negative attention fraternities and sororities obtain for incidents like CSUN’s own Armando Villa, who died from a hiking incident with his fraternity in an alleged hazing ritual.

What happened to Armando Villa was not only tragic, but completely unnecessary as Villa’s father. also named Armando, told me in an interview, “You don’t go to college to die.”

A true statement from a man who has experienced a heartbreak I may never experience. Yet, why did it have to happen? Simply because his son joined an organization in his first year of college?

Villa’s story was an extreme case of hazing. Not every organization leaves you barefoot, dehydrated and lost in nature. The fraternity deserves whatever consequences that will come to them. However, before all college social-organizations take the blame for hazing, society needs to look at itself in the mirror.

Hazing happens across the nation and outside of college fraternities, such as in the military, professional sports (with Jonathan Martin and the Miami Dolphins), in gangs and maybe even to the new employee or intern at your office.

As a disaffiliated member of a fraternity at CSUN, one of the first things all new Greeks learn about is hazing in an all-day event called Greek 101. Here hazing is defined as any act a new member participates in which active members are not doing. The all day event engages new Greeks in activities which prepare them for possible hazing scenarios.

This can be carrying specific items, driving people places, cleaning, exercise, uniforms, wearing pins or t-shirts, being forced to drink, hike or any other activity. However, it is clearly defined that hazing is illegal, according to California law.

So, why haze in a Greek organization if you know it is wrong? How does this keep happening despite campus’ efforts to eradicate it? The answer is the same reason why many of us prove ourselves to our bosses, coworkers, and teammates.

You don’t have to look hard to find hazing. Turn on ESPN to see what haircuts NBA and NFL rookies have. Talk to your buddy about the humiliation they have faced in the military or even as an intern. All of them are new people chasing a sense of belonging in an exclusive community. In this context it is a student wanting to make the University a smaller and more welcoming community.

For the most part, new-members are aware they are able to object at any time, or alert the authorities at anytime. However, once you are able to do something that connects you with older people whom you hope to be, an extra incentive occurs.

When you are in those shoes with a chance to connect with 100,000 people across the nation, including fraternity alumni like prominent presidents, professional athletes and company CEOs, there is an extra incentive to do something you would not normally do. Instead, it results in drinking more than you know you can tolerate, wearing something stupid, or even being sober enough to drive everyone home.

Where are these 19 to 23-year-olds learning this behavior from? They learn it from older brothers, supervisors, coaches, sergeants, teachers, coworkers, teammates, and other members of a group they were trying to join. This is not a way to sympathize with fraternity or sorority hazing, but an example that hazing is a cultural problem.

Villa’s story raised a lot of questions about how these organizations have persisted for years with secret hazing traditions, as most hazing incidents do. Yet, as a former member of a fraternity I can say my first year of college was not the only time I did things to gain acceptance from my peers, which could be defined as hazing.

I picked up the bags everyday due to coach’s endorsement of Senior football players forcing me to do so. As a Varsity Freshmen, I sat three to a seat while other players got their own seats. When I started dish washing I was forced to work all the weekend shifts and extra cleaning of grease traps, as the new guy. Even when I got a new job as a salesman, I was stuck stocking the floor while other sales people were able to make sales on the floor.

Why did I do it all? Looking back at it, I was used to proving myself to my peers, so I could have a sense of belonging and connection.

Hence, hazing is not only the best kept secret of universities but American society. Like many other people, I do not regret any of the actions I voluntarily did for acceptance of my peers, as it molded me into who I am. But this does not justify hazing in any context.

Before people start pointing fingers at fraternities and sororities, we need to look at our own hazing skeletons. Only than can we truly eradicate the behavior from universities and work places.