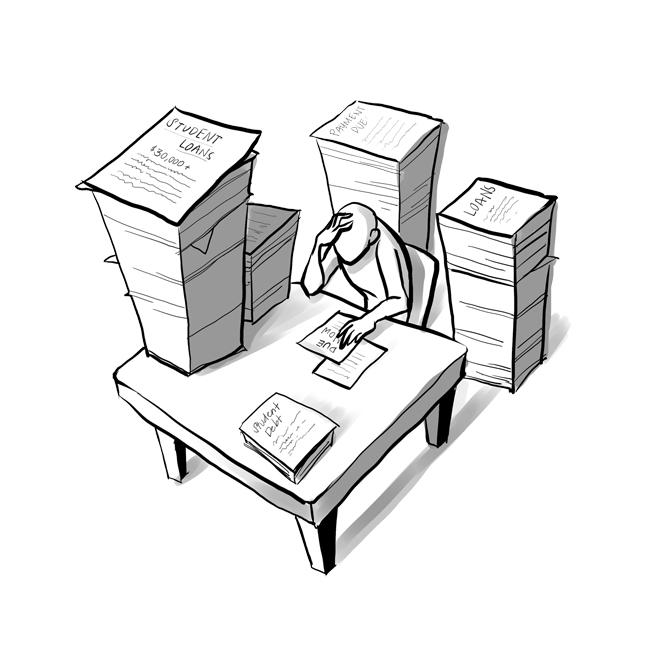 College is expensive. Well, no shit.

By today, college is now being associated with rising tuition and an ever-increasing mountain of debt.

The topic of student debt has become something that politicians are now using to sway favor from a growing voting population that is stumbling to pay back their student debt.

Just this summer, Obama signed an executive order to further limit student debt payments to 5 million more youths that are qualified for the Pay As You Earn (PAYE) program. This event made headlines, with many news outlets quoting Obama’s line about how “Education is the single best investment you can make in your future.”

Yes, Mr. President, education is a great investment to make. However, as many people will realize, the PAYE program will not solve the problem of student debt. Granted, it will help many in paying back their debt and make a living at the same time.

But what doesn’t make headlines is the root of the surmounting student debt. Rising tuition and a general disinvestment of higher education in America.

Economically speaking, it would make sense that tuition will increase as the American economy picks up. However, the economy does not just mean an increase in business profits. It also means an increase in wages for the average American.

But, reality is different. College tuition has taken a steep increase while living wages have stayed relatively stagnant.

On the flip side, college tuition spiked fast, quickly outpacing what a minimum wage worker can make per year.

For the sake of localizing this issue to CSUN, let’s focus this article on public education institutions.

A chart compiled by the College Board reported that within the past 30 years, tuition increase has finally slowed down.

Now the correlation between all these numbers, part of the student debt problem lies in the increase of tuition and how wages have not increased to meet the increasing cost of college.

In between and before the two large spikes in tuition increase, tuition has steadily increased per year. Living wages stayed stagnant over long stretches of time. It makes no sense that families would be able to keep up with constantly increasing college costs while their wages stay stagnant.

The student debt problem also exists in the exhaustive defunding of public education. In California alone, between the years 2008-2013, a chart compiled by the Center On Budget and Policy Priorities found that spending on students in public institutions dropped a sharp 29.3 percent.

Due to defunding, public colleges have had to increase tuition to offset the loss of funding from the government.

The costs fall onto the family of the college student. Now, connect the dots. Public education has been defunded greatly, living wages has stayed relatively idle for long stretches of time and tuition has greatly rose.

Less funding from family members means students rely more on taking out loans in order to cover the costs.

The situation doesn’t look any better for recent graduates. The Department of Labor reports that only 63 percent of people between the ages of 20-24 are employed. Unemployment rates for college graduates stands at 8.8 percent. The national unemployment rate is 7 percent. In other words, there is a large of portion of college graduates who are not making income in order to pay back their debt.

Along with interest rates on student loans, the debt increases ever more.

So how do we go about to solving this problem? Well, there are no easy answers. It’s not like we can drop everyone’s student debt. PAYE is only just a temporary band-aid for a gaping wound.

If Obama truly believes that education is the best investment for our future, then education funds should stop being cut. What does it tell the public if our own government chooses to take away from our public education funds while military funds are on the rise?

Who is being pipelined into higher education? With increasing costs, higher education becomes less of a reality for those who cannot keep up with the costs. Education is slowly becoming more exclusive to affluent people, even at the public level.

What can we do then? Advocate for the refunding of education. If the U.S. military can budget a billion dollars to increase American military presence in Eastern Europe, then surely there are solutions to budgeting more for education.

Let those in power know that we as students refuse to be disenfranchised anymore. Develop solidarity amongst other students to show that we have power and will push for change. Let’s take back our education.