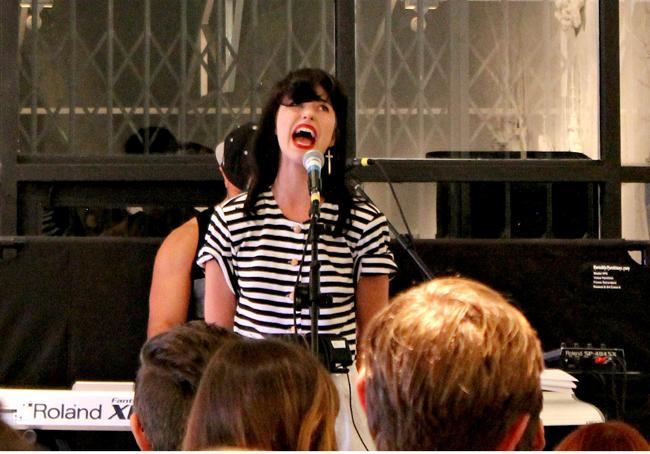 Though most people know of 24-year-old New Zealand native Kimbra from her 2013 power duet with Gotye, she is proving herself to be much more than a featured voice. Her newest album “The Golden Echo” was released last Tuesday and features an evolved sound that stands out on its own.

Since the sultry sounds of her last album “Vows,” Kimbra has picked up the tempo and introduced some funky synthesized disco tunes, along with sonic references to 90’s R&B and pop music. With such influences, it is only appropriate that her first single off the album be titled “90’s Music.”

This song presents a familiar sounding pop beat but defines itself with slightly more complex lyrics such as “Stones at my window, like Romeo. Shot by Cupid with the bow and arrow.” The accompanying music video mixes the likes of artists Kreayshawn and Missy Elliot for a look that fully embraces the current all-things-90’s fad.

Other songs off the album endorse a more complex sound such as “Goldmine,” which has a slow moody flow that sounds more mature than its “90s Music” counterpart. Though her first single off the album fully indulges in a pop sound of the past, the rest of the album seems to carry a more dynamic tone.

“There is a strong rhythmic focus and a heavier backbone,” Kimbra said of the new album at a recent gallery appearance. In relation to her debut album, Kimbra says her sound has gotten a lot “tougher.”

Last Thursday at the Graffiti Cafe in Los Angeles, Kimbra followed her recent album release with a corresponding art gallery exhibit that featured physical representations for each song on the album.

She mingled with guests and urged everyone to observe the works of art that were each accompanied by an iPod nano that played the song off the album that the art corresponded with. Though she performed three songs off her new album, she said the event was “really more about the artists and their work.”

Kimbra asked fifteen artists, four friends among them, to collaborate on the gallery exhibit. Each was designated a specific song from the album and asked to contextualize the song with their own artistic style.

Work varied from small bright oil paintings to dark sculptures and even a bright felt sewn sculpture that resembled an eyeball monster with legs, shiny shoes and protruding flowers.

According to contributing artist Miguel Jiron, Kimbra reached out to most of the artists individually through social media.

“She reached out to me on Twitter because she liked an illustration I did and then she invited me to be a part of the show,” said Jiron, a 30-year-old New York native. “I knew as soon as I heard [the album] that my work would fit well with the show.”

Jiron’s small acrylic painting corresponded with the song “Nobody But You” and is a multicolored wave-like scene that uses texture and color to convey a bright, oceanic feel. The song is similarly vibrant and lively with a romantic message of monotony that ends in an old-fashioned piano solo.

“The production work is extremely lush and detailed,” Jiron said of The Golden Echo.

“I really gravitated towards what it turned out to be.”

Before performing for the packed Graffiti Cafe, Kimbra, dressed in sky-high black platform boots, white linen pants, a striped shirt and her signature dark banged hair and red-lipstick, explained the inception of the inventive gallery exhibit.

“It is just something special to celebrate bringing this album into the world,” she said.”What if we get a bunch of artists to listen to the music for a month, ingest it, live inside it?” Kimbra said that this was the initial question that drove the idea of the exhibit.

When asked about the evolution in sound from her previous album she said that she and her co-producer had “a very free space.”

“We embraced creativity and had access to more instruments.” Relative to her prior work on the album “Vows” Kimbra said, “I had a little more creative control but the space was the same.”

Following the show, the fashionable group of music and art enthusiasts who attended the event mingled and enjoyed the sonic, visual experience which included an open bar featuring mason jar moonshine concoctions.

Hillary Hawkins, a 22-year-old publicist, stuck around after the show to examine the works of art and discuss the show with friends.

“She has an incredible voice. It is completely one of a kind,” Hawkins said. “She’s become a stronger artist, especially tonight. Putting visuals to the music was really impressive.”

Hawkins’ friend Ali Morreale chimed in, “She’s creating her own vibe. She’s come into herself and become more abstract.”

Kimbra’s exhibit will be on display at the Graffiti Cafe for the next two weeks just before she begins her nationwide tour in October.