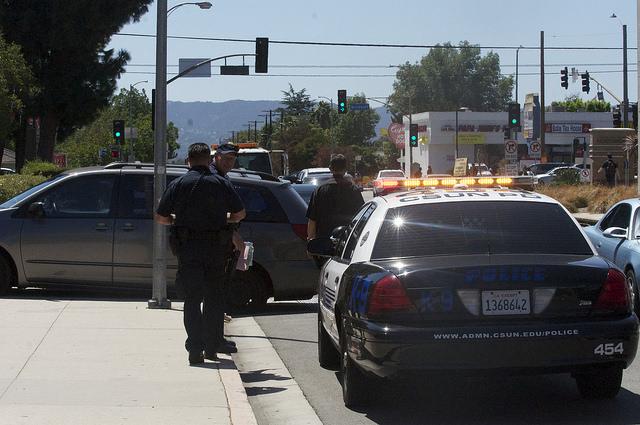 The CSUN Police Department arrived on the scene of a Toyota minivan that crashed on Lindley Avenue near the VPAC loading dock. The suspects fed the scene and were later apprehended by CSUN PD. Photo credit: Calvin Ratana/Opinion Editor

The Oxnard man involved in high-speed pursuit that ended on the CSUN campus Tuesday morning was being booked at the Ventura County Jail Wednesday, authorities said.

Andrew Coombs, 25, and Melissa Riley, 30, allegedly crashed a stolen van into a curb near the Valley Performing Arts Center around 11:30 a.m., the Simi Valley Police Department said in a release.

The pursuit began in a residential neighborhood at 11 a.m. near Yosemite Avenue and Mt. Sinai Drive in Simi Valley, police said.

The officer attempted to stop the vehicle but was instead led through the neighborhood at high speeds.

As the vehicle fled, stolen credit cards, various forms of identification, and drug paraphernalia were thrown out of the vehicle, police said.

Coombs entered the 118 freeway eastbound and exited on Reseda Boulevard.

The van, recently stolen from a Simi Valley hotel, crashed into a curb near the VPAC around 11:30 a.m., authorities said.

The two suspects fled on foot into Citrus Hall and it was reported by a student that they dropped a bag while entering the building, Anne Glavin, CSUN police chief, said.

A CSUN police officer and his K-9, Mitch, searched the vehicle and the Los Angeles Police Department Devonshire Division launched a helicopter in pursuit of the suspects.

Coombs and Riley were found on the second floor and taken into custody without incident, authorities said.

The Simi Valley police are asking anyone with information about Coombs and the incident to call 805-583-6282.