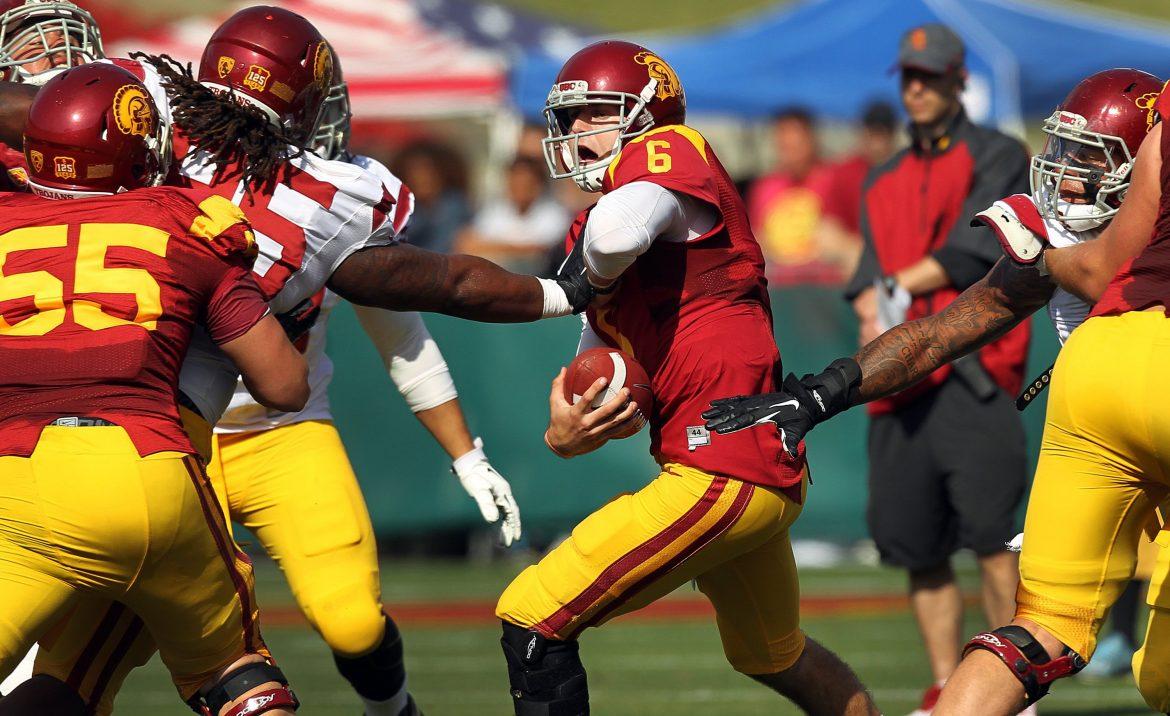 With no pro football team, Los Angeles’ two powerhouse football teams give football fans at CSUN plenty to be excited for as the season beings Saturday.

Not a fan of the college football team from West Los Angeles?

No worries. The USC Trojans football team may have a new coach but the expectations are the same.

The Trojans look to compete with the other four, top-25 teams amongst the Pac-12 Conference.

In spite of the influx of new personalities, schemes, and terminologies associated with a first year head coach, the No. 15 ranked Trojans are the Bruins greatest threat in the Pac-12 South.

After seven years as an assistant with the Trojans, Steve Sarkisian hopes to capture some magic from the 2003 championship team, where he was a quarterbacks coach.

Sarkisian spent the last two seasons as head coach of Washington, so the program hopes to have found the right guy for the job.

The Trojans begin their season Saturday when they face the Fresno State Bulldogs at home.

As in past, at USC, success starts with the quarterback.

After righting himself from early season struggles, junior quarterback Cody Kessler proved himself a competent starter, if nothing else.

It was not until exploding for 345 yards passing and four touchdowns in the Royal Purple Las Vegas Bowl that he began to look the part. With no shortage of weapons, he will now have to play the part.

Freshman Ajene Harris emerged out of quartet of much more heralded freshman and seized a starting spot at receiver from sophomore Darreus Rogers.

In 2013 injuries forced the Trojans to feature three different running backs who, until they themselves got hurt, dazzled and combined for 1849 yards.  Javorius Allen, Justin Davis and Tre Madden will all again feature prominently.

True freshmen Toa Lobendahn and Damien Mama with be enlisted into a starting unit that lost Marcus Martin, one of the most talented interior lineman linemen since Ryan Kalil.

The defensive front seven, is as talented as one would expect at from a Trojan side, but injuries have robbed it of its depth.

Unscathed is junior All-American defensive end Leonard Williams who may already be the nation’s best.

Injuries to senior corner back Josh Shaw deprive the secondary of an experienced leader, but talented sophomore and Sporting News Freshman All-American Su’a Cravens has fought through his own training camp ailments to make the home opener.

It is hard to fathom a scenario where USC wins the Pac-12 South while losing a head-to-head game against their rivals, the UCLA Bruins. Last season’s results were a 35-14 victory for the Bruins.

In the past two seasons, UCLA has captured a victory against USC. Besides that, the Trojans bested UCLA five times dating back to 2006.

Also, it is hard to fathom a scenario where Kessler out duels Bruin quarterback Brett Hundley at the Rose Bowl.

One must also take into account one of the defining features of the post-Carroll era, which is USC’s inability to win over quality opponents.

From 2010 to present USC has only recorded three wins over schools ranked in the top 25 by the Associated Press, according to ESPN.

Either way, this UCLA vs. USC match-up should be one of the many college football games that the Los Angeles area buzzes about.