Send planes, not people, to Iraq 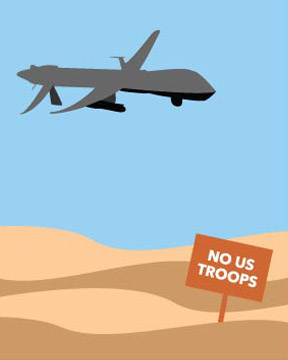 From a distance, the more fresh disasters seen in Iraq would make any reasonable person’s jaw drop. Let’s acknowledge that the United States’ unspeakable actions in 2003 had inevitably led to a conquest of Iraq at the hands of a jihadi network, taking advantage of a weak government there.

So far, that all came true. And three years after ending Bush 43’s version of the Iraq War, it could be said that Iraq was, to quote Lincoln, “Now… engaged in a great civil war, testing whether that nation, or any nation, can long endure.” Though unlike the crises of the Arab Spring (or Winter), in Iraq this is not the whole case.

The Islamic State of Iraq and Syria (ISIS) has proved, in its feral conquests across Iraq and Syria, its hatred of the west and western ideas. This is exemplified by the mass conversions against the Yazidi minority in Iraq, the “reestablishment” of the caliphate and the disgusting and sadistic beheading of journalist James Foley.

The freedoms we share as Americans, specifically freedom of religion, free speech and government representation are currently unavailable to Iraqi civilians. For help, we have sent airdrops providing humanitarian aid to the Iraqis and Yazidis.

ISIS was also met with a series of airstrikes, destroying fortifications and artillery, likely killing ISIS militants in the process. The reactions by Americans have been mostly in support of these airstrikes, which must come as a result of Obama’s promise to not send troops on the ground to fight ISIS directly.

The well-known and bold journalist Glenn Greenwald has criticized the “humanitarianism” in bombing ISIS militants, claiming it is an example of America’s imperial standing in the world. As an admirer of Greenwald’s, I think his viewpoint is justifiable and well understood.

What I think cannot be missed by Greenwald or anyone, though, is the need to defend ourselves from radical fundamentalists who want our whole way of life to be totally annihilated. Like it or not, the War on Terror is not over.

Obama’s bombing of ISIS militants has proved (so far) to be the best alternative to sending troops back to Iraq. These attacks, however, cannot resemble the indiscriminate bombings orchestrated in Libya and Yemen.

I do not want another American soldier to die in the sands of Iraq, but we now have a new enemy that must be stamped out. We cannot let our guard down, or risk another gruesome attack resembling what was observed in New York City thirteen years ago.

It is also regrettable that we were “briefly allied” with ISIS in Syria, and we now may have support from the genocidal dictator Bashar al-Assad. Obama has said he would bomb ISIS leaders in order to block future militants from joining the terrorist group.

Either way, we all have to realize the important matter at hand and end ISIS’s reign. Their brutality has even been claimed to be worse than Al Qaeda’s.

It was silly and stupid to have supported the Iraq War, and we may have paved the way for ISIS’s rise. Yet we need to correct our wrongs.

And after the senseless murder of James Foley, a clear act of terror, ISIS has declared war on the United States and all that our liberties stand for. Supposedly, the bastard who brought the knife to Foley’s throat may be a British citizen and rapper-turned-jihadist-wannabe.

My hope is that he and the rest of his cult of fundamentalist gangsters will soon no longer be a threat to the United States or the rest of the enlightened and western world.

In 2007, the classic rock group the Eagles released an album titled “Long Road Out of Eden.” The fantastic song of the same name was, according to band co-leader Don Henley, about the War in Iraq, where “the road to empire/ [was] a bloody stupid waste.” With our current puzzlement, let’s do right not just by the Iraqis but by our national principles that have maintained since 1776.