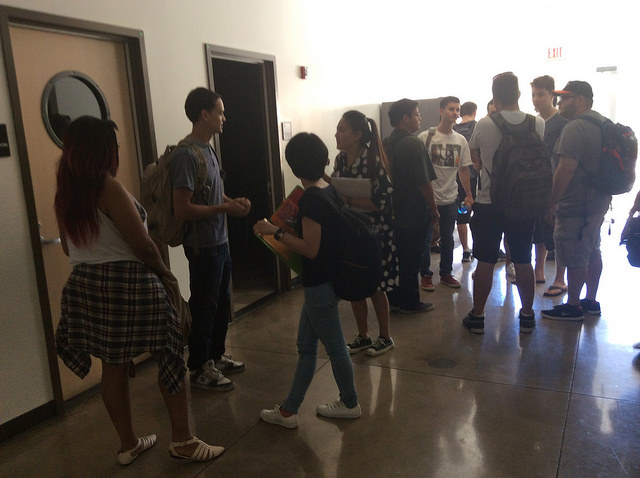 Some students left their classrooms in Manzanita Hall during the short power outage while others used their laptops and cell phones to illuminate their desks. Photo Credit: Calvin Ratana/ The Sundial

More than 90 percent of the campus had been restored shortly after 1 p.m., according to a CSUN emergency notification.

Other than a delay in University Hall when a generator failed to turn on, full power has been restored to the the affected areas by 11:48 a.m. The cause of the outage remains unknown.

The power outage may be related to a blackout near 18033 Ventura Blvd. near Lindley Avenue in Encino which is currently ongoing, said Albert Rodriguez, spokesperson for the Los Angeles Department of Water and Power.

The Encino power outage began at 11:30 a.m. and is currently affecting 460 customers. Rodriguez said the same circuit may have affected the Northridge area, as power is restored incrementally.

Customers in Encino can expect the power in their area to return in two to three hours, Rodriguez said.

All classes were still in session, according to a CSUN alert.