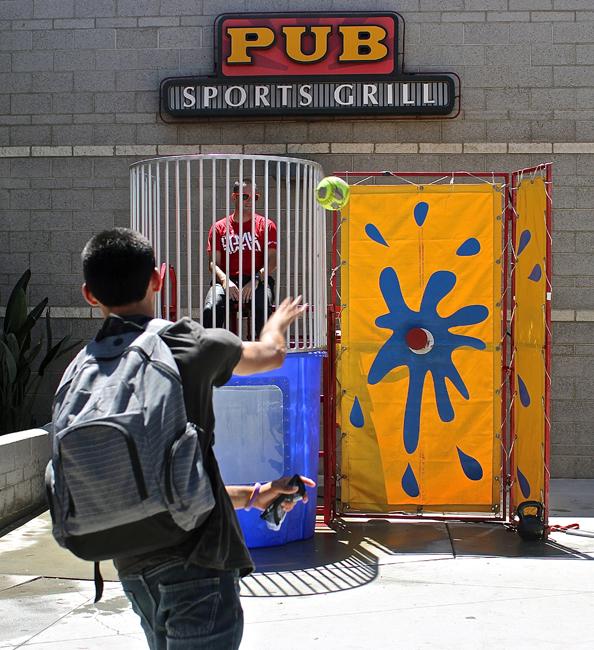 CSUN’s 2014-15 academic year kicked off Thursday with Matafest, an event geared toward welcoming the students to the campus and also providing information about services offered by the University Student Union (USU).

Despite 90-plus degree weather, hundreds of students attended the event and visited tents that detailed services such as the Games Room, the Student Recreation Center, the Pride Center, and others.

“It’s really crucial to have them all here so students really know what resources are available to them as a student,” said Randy Sorenson, events supervisor for the USU events department.

Students were encouraged to visit all the tents provided by the USU by being given a passport, which is a small card with nine spots that students had to get punched in order to receive prizes.

If students visited three tents, they were able to get food at another booth. Five punches meant students could receive sunglasses or an inflatable beach ball as a prize.

If students visited all nine tents, they were entered in a raffle that had a $500 bookstore gift card, a Kindle Fire, and other items as prizes

Eric Planas, senior producer for Associated Students productions, said the passport card was the most unique part of the Matafest event.

“It makes you want to go talk to people in order to receive prizes or receive food,” Planas said.

Alana Beck, 32, senior anthropology major, said that she didn’t know much about the USU until last year.

As a transfer student, Beck said this type of event would be beneficial for students who didn’t have “those extra years” to learn about services.

For entertainment, Matafest featured a juggler, a woman on stilts, music by DJ Alex Ortiz, and a Beach Boys tribute band called Surf’s Up.

Some of the USU staff volunteered to participate in a dunk-tank game where students could throw a ball at a target in order for the employee to fall into a tank of water.

Students were kept cool with misters attached to fans at every booth, and were provided with cool drinks and shaved ice.

Vianney Navarro, 19, sophomore liberal studies major, had walked past events like Matafest in the past, but decided to see what was going on this year.

“Everyone seems so open,” Navarro said. “It was really nice getting information that I didn’t know.”

Navarro said the event gave her the impression that CSUN wants its students to be involved in the school.

At around 11:30 a.m., Ortiz called up five students to compete in a dance-off in order to win gift cards.

Planas said Matafest was a good way for students to get involved with the CSUN community.

“I think it’s awesome for students to attend this because getting involved is so essential to your college experience,” Planas said.