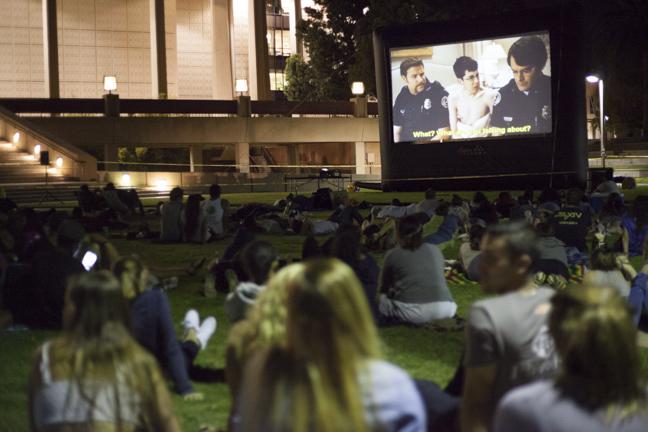 The feature film Superbad was shown on the screen in front of the Oviatt Library on Thursday, August, 28, 2014 in Northridge, Calif. Photo Credit: David J. Hawkins/Sundial

As summer draws to a close so does CSUN’s third annual Summer Movie Fest.

The final movie shown yesterday was the R-rated film “Superbad.” Every Thursday during the summer the Associated Students (AS) host movie screenings on the Oviatt Library Lawn which are free and open to the public.

Around a thousand people gathered on Matador Walk to watch the exploits of Seth, Evan and McLovin. Some games and activities were available such as a carnival-style basketball game and a photobooth with an assortment of silly props. Food was also sold from nearby food trucks.

AS used social media to publicize the event.

“I knew they were having these events through Facebook” Briell Huerta, freshman psychology major.

AS member Stacey Aguila said their biggest turnout was for the Disney hit“Frozen” which was shown to more than 2,000 people. Raffles were also held for various prizes. The money they raised from raffle tickets will go toward rebuilding the San Fernando Valley Rescue Mission which burned down May 4.

“12 of them were kids and they were homeless, staying with the mission, a part of our 90-day program.” Warner said everything they had was destroyed in the fire. “Our trucks, our food supply, all of their stuff (was lost) and now we’ve just been in the process of rebuilding,” she said. Warner said she has seen a great outpour of support from the community.

“AS has been great at helping us,” she said.