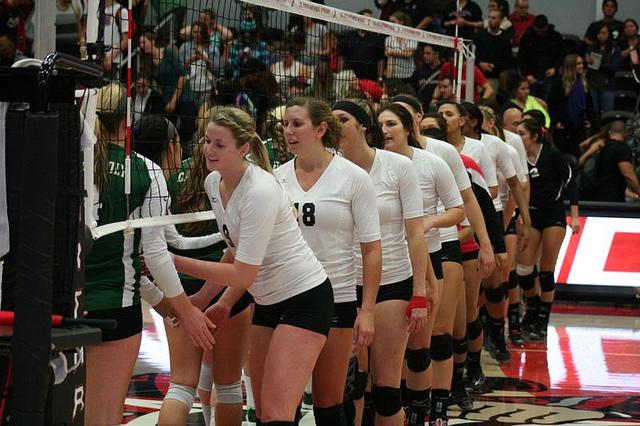 Lead by a barrage of kills from junior outside hitter Cienna Stinson, the Matadors (3-0) began their season with three victories before taking home the UNLV Invitational Championship.

Over the weekend, the Matadors left the invitational with an undefeated record after beating the UNLV Rebels (2-2) on Friday and defeating the Western Kentucky Big Red (1-2) and the Rebels again, on Saturday.

Her game high of 15 kills against the UNLV Rebels on Friday and her career-high performance of 26 kills during the Saturday night matchup against the Rebels secured the Matadors’ victories. Stinson’s total is the most by a Matador hitter since 2011, according to Gomatadors.

In both squads’ opening match, CSUN lost the opening set of the season to UNLV before winning the next four sets and sealing the Matadors’ second consecutive season opener victory.

Saturday morning’s matchup against Western Kentucky saw the Matadors continue their momentum with a sweep of the Big Red.

Senior Casey Hinger lead the Matadors with a match-high 16 kill eruption against the Big Red. .

The Rebels started Saturday night’s game with a bit of an edge as the first two sets ended 16-25 and 16-25.

By set three, the game took a turn and the Matadors began to dominate. Junior setter Steffi Miller’s ace in set three gave the Matadors 18-12 lead before closing out 25-20.

The Matadors ended set four with 25-23 forcing a deciding fifth set to take place. The Rebels led set five 12-9, until a kill by Stinson shortened the lead.

The team went on to score the five last points of the game, closing set five with 15-12 and taking home the win. The Matadors also left the tournament with a few individual accolades.

Miller was named to the all-tournament team after ending the tournament with 56 assists and 5 kills.

Sam Kaul, who hit a .700 against Western Kentucky, took away a few all-tournament honors She finished the tournament hitting .462 along with two blocks and a pair of digs, according to Gomatadors.

The Matadors are set to take on the Arizona Invitational on Sept. 5.