Film students know how to impress: Reasons why Hollywood Reporter didn’t forget them 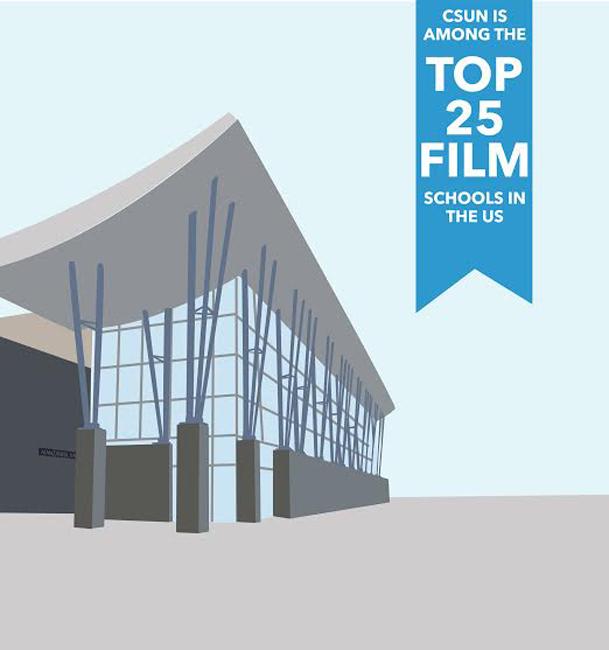 A great honor has been bestowed on CSUN’s Cinema and Television Arts department with its placement on Hollywood Reporter’s list of the top 25 film schools in the country.

Department Chair and Head of the screenwriting option, Jon Stahl, is proud of this recognition.

“It is an affirmation that our students come out of the program well-educated, well-trained, and ready to go, brimming with ideas, with creativity, with deep-seated dedication and motivation,” Stahl said.

The school has several advantages, which have helped it land as number 22 on the list alongside schools such as USC, NYU, and UCLA.

The faculty within the department have extensive experience and knowledge that helps prepare students for their career path.

“We have faculty here who are still active in the film industry, which I think is a really great resource for students to draw upon,” said Victor Frost, CTVA alumnus.

Among the experienced professors who make up the film department are Nate Thomas, recent Emmy winner for a PSA campaign produced and directed for the FBI; Alexis Krasilovsky, whose documentary on world hunger, Pastriology (2013), is beginning to make rounds in the festival circuit; Joel Krantz, expert on Pro Tools, an industry standard for post production software; and Eric Edson, author of THE STORY SOLUTION: 23 Actions All Great Heroes Must Take (2011), which has been a hit on Amazon; along with many more professionals.

According to Stahl, several faculty members are known to bring students onto their film sets. Professor Karen Dee Carpenter, for instance, recently shot a film over the summer for which she employed students.

Another aspect that distinguishes the CTVA film program is that all of their focus is on the undergraduate level, whereas almost all of the schools at the top of the list prioritize the graduate level.

“All of our energy, all of our resources, all of our talent, and all of our attention is poured into these undergraduate programs,” said Stahl. “Our students are creating productions that are going out into the world, screening at festivals internationally and competing at various competitions alongside MFA students from elite institutions.”

The department also offers a mix of classes that range from theoretical practice to art and commerce, and critical thought to technical procedures.

Frost praises the program for its audio and sound editing classes and its intense screenwriting classes. Above all, he is impressed with the courses that teach students how to operate the cameras.

“You learn all of the equipment. Nothing beats getting your hands on the equipment and actually using it,” Frost said.

“Most of my classes were hands on, which I enjoyed… It gives you a feel of what you should be expecting,” Landaverde said.

Besides having a knowledgeable faculty, a well-developed undergraduate focus, and impressive courses, the school has the advantage of being placed near the heart of the entertainment industry and offers classes on studio lots.

“We [would] get a list of new shows that start either in the fall or spring and we would be able to participate in the audience,” Landaverde said.

Additionally, the department has the opportunity to employ lecturers and part-time instructors such as television star Bill Cosby. “We can bring other working professionals and top artists to speak and work with our students,” said Stahl.

Students also have the chance to intern at studio lots, networks, production companies, and facilities with the resources provided.

“Students who go out there represent us well. They’re very appreciative. They know they have to work… Our alumni are working all over this town in all capacities and in all aspects of the entertainment industry,” Stahl said.

This recognition in turn, gives the school an additional platform that primarily benefits students when they seek employment or funding for their projects.

Landaverde is glad she made the choice of going to CSUN.

“… it has opened a lot of doors for me and my career. When I was looking for a job, a lot of the time the interviewer would tell me that I graduated from a great school,” Landaverde said.

The CTVA department continues to develop and improve the tools it provides students to succeed. The department has a new Master of Fine Arts program for screenwriting, it hopes to revive a graduate program in critical studies, and the department is about to launch a non-degree program through extended learning in post production and in partnership with the company, Technicolor.

“Ultimately the effect is that our students know how to impress,” said Stahl.