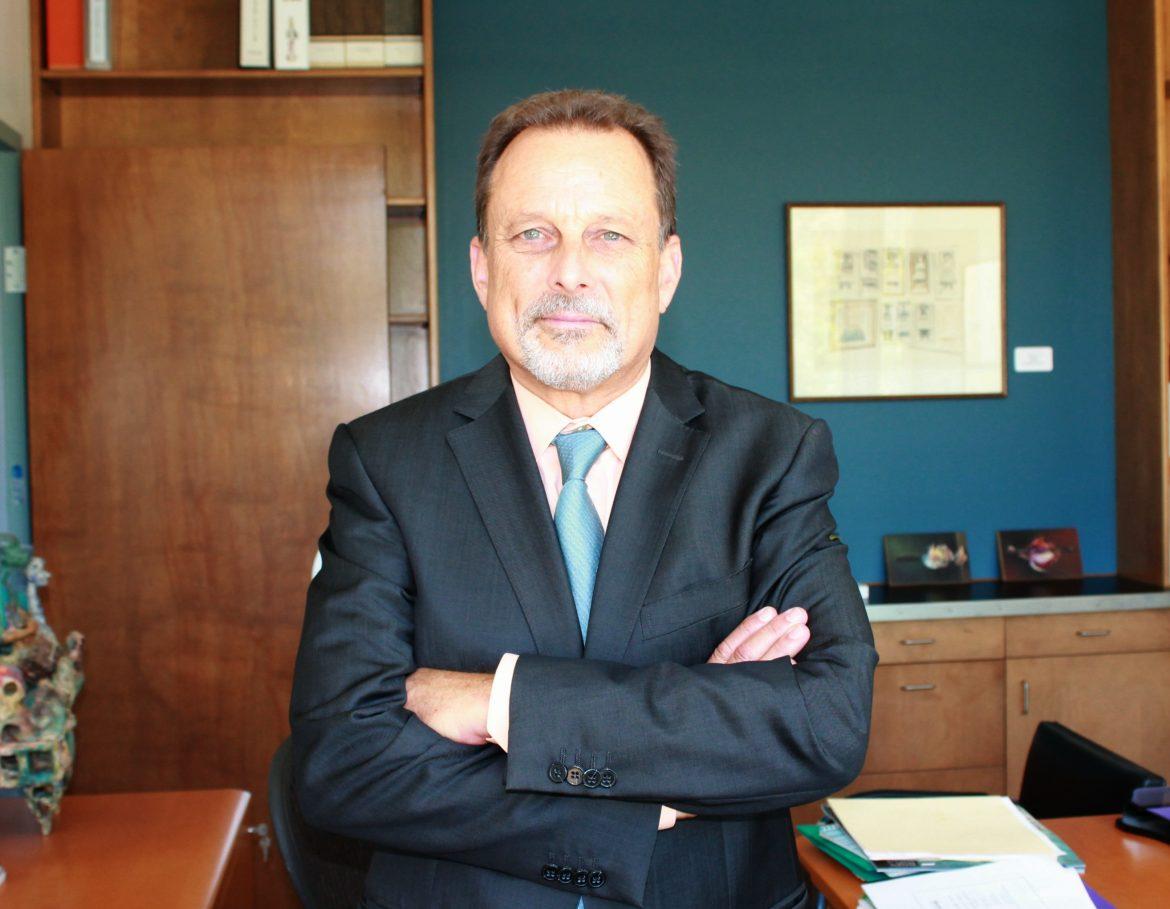 For Jay Kvapil, the new dean of Mike Curb College of  Arts, Media and Communication creating art in the studio goes hand in hand with his administrative responsibilities. This might seem like an unordinary combination but Kvapil’s unique background explains this possibility. Kvapil brings a fresh perspective to the Mike Curb College by keeping a close connection to the college’s purpose which is to promote art as a form of communication.

Kvapil originally planned to attend law school but was introduced to ceramics when his friend convinced him to take an introductory class his freshman year of college. From that point on, Kvapil’s interest in ceramic arts stuck with him. Shortly after earning a Bachelor of Arts degree in literature from the University of the Pacific in 1973, Kvapil moved to Kyushu, Japan for a year and a half to study at Takatori Seizan Pottery.

“The thing that’s always fascinated me about ceramics was the unpredictability,” said Kvapil. “The glazes are very rich, very unusual. You can put something in the kiln and it looks completely different after firing. Ceramics is all about the process of transformation. Nevertheless, I never want to know perfectly what is going to happen. I do things in such a way that I will be surprised. I create a little bit of chaos. I want that greater element of chance.”

Kvapil returned to the United States to earn a Master of Fine Arts degree in 1981 from San Jose State University where he also worked as a halftime tech in the art department. Right after finishing graduate school, Kvapil was in charge of a large national ceramics event at the university.

Kvapil was hired as an assistant professor of art at California State University in 1986, Long Beach (CSULB) in 1986 before eventually becoming the chair of the art department. Before becoming the director of the CSULB School of Art in 2011, Kvapil also held the positions of associate dean and interim dean for the College of Arts.

Administrative Director Karen Warner at Cal State Long Beach describes Kvapil as someone who was very devoted to the school of art.

During his time at Cal State Long Beach, enrollment into the art department almost doubled. Kvapil said he really values the focus of the college and is interested in also working with communications and journalism students.

“It will be something new to work with,” said Kvapil. “But, I think whether it’s visual arts, writing, speaking…it’s all communication. Art is a form of communication.”

Kvapil’s interest in an administrative career took off while he was in graduate school.

“An adviser said, ‘someday you are going to be a department chair,’” said Kvapil. The advisor was right and Kvapil went from a teaching job at the University of Hawaii, to rebuilding the ceramics program at CSULB where he was eventually voted as department chair.

Throughout his career in administration, Kvapil has remained an active artist.

“I don’t think all administrators have to work at a high level in their field or in creativity, but I don’t think it hurts,” said Kvapil. “For me, it reminds you of the reason you got involved in it in the first place. There had to be a spark there at first and still having that spark alive is very important. Coming back to the studio reminds me how hard it actually is. It’s humbling.”

“When I first came back to the studio I wasn’t concerned about showing,” said Kvapil. “I just wanted to produce, and by golly people wanted to buy the work. Right now, Couturier is my main gallery. The owner really understands the work and I think that’s really important.”

His artwork incorporates Asian and American influences. For Kvapil, the unpredictability of ceramics as a medium is part of the reason why he chose this field.

“Working is a sort of meditation for me,” said Kvapil. “When I was younger, I thought I needed eight hours in the studio to produce. Now, if I have a half hour in the studio, I can get something done. I just work.” Kvapil’s combined years of working in higher education and as a professional artist have given him a unique point-of-view on art and how it applies to university students. His previous experiences could lead to big changes for CSUN’s college of arts, media and communications.