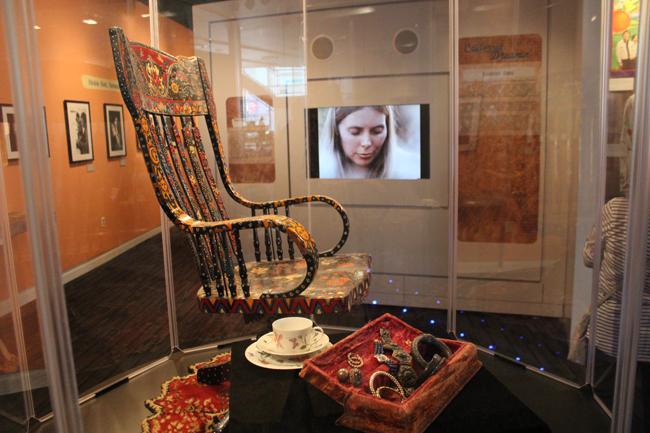 If you’re a music lover, you are not going to want to miss the summer exhibit, “California Dreamin:’ The Sounds of Laurel Canyon 1965-1977” featured in the Grammy Museum, located in the heart of downtown at LA Live.

The exhibit features photography, music and memorabilia from artists of the Laurel Canyon music scene and showcases the works of influential photographers of the time, including Henry Diltz and Graham Nash.

The 60’s and 70’s was a time when music and culture were both in tune, becoming a pivotal moment in music history. Singers and songwriters who were exploring the Laurel Canyon area in a free state of mind joined with photographers who captured it all.

The exhibit showcases writings from bands and artists like Crosby, Stills and Nash, the Eagles and Joni Mitchell, as well as guitars and clothing worn by the famed icons. Maps on the walls displayed some of hottest music venues along the sunset strip including the Troubadour, Whiskey A-Go-Go, The Roxy and London Fog.

Photographer Henry Diltz shares stories about how the cover for Crosby, Stills and Nash’s album had to be re-shot because they were in the order of Nash, Stills and Crosby. When they appeared at the same house the next day, it had been demolished, which is why the band appears out of order in their cover.

A unique feature of the exhibit is the “living history booth,” where visitors can record their memories of Laurel Canyon during the late 60’s to keep stories alive and current. This space is filled with art and sounds of the mid 60’s and 70’s and is a great representation of the popular aesthetic that came out of the famed Laurel Canyon, which made stars out of so many bands.

Check out this exhibit and see how it all started for bands like Buffalo Springfield and musicians like Linda Ronstadt.

The Annenberg Space for Photography in Santa Monica has a summer exhibit, “Country: Portraits of an American Sound” that began in May and runs until September 28th. The exhibit features the country’s most influential artists like Johnny Cash, Dolly Parton and Hank Williams.

Work from an array of photographers is displayed, including contributions by David McClister, Walden S. Fabry, Henry Diltz and veteran staff photographer of the Grand Ole’ Opry, Les Leverett. These candid images show a very relatable side to the biggest names in Country music.

Country music had evolved as the “people’s music” which was easy to listen and dance to. Born from the heart of the country, the sounds emulated the freewheelin’ aspects of it’s people, with lyrics of honesty.

The exhibit features a 30-minute film showcasing photographer’s stories and relationships with country musicians and how they were inspired by the great American sound that is country music.

The space also features an old jukebox filled with country classics and today’s hits, so visitors of all generations can enjoy the sounds of country music. Alongside the jukebox, an instructional video breaks down the moves to the popular two-step and do-si-do dances, as people listen to their song of choice. Magazine covers of Rolling Stone are plastered on the walls to give a history of artist’s careers featuring the Dixie Chicks controversial cover with writing all over their bodies.

Attendees are welcome to decorate a white board wall by writing and sharing their favorite country tunes of all time. The photographs at this exhibit showcase another side to these artists that we haven’t been familiar with. These candid images show a very relatable side to the biggest names in Country music.

The Annenberg Space for photography is located at 2000 Avenue of the Stars in Los Angeles. The museum is closed Mon-Tues and open Wed-Sun 11am-6pm. Admission is free!