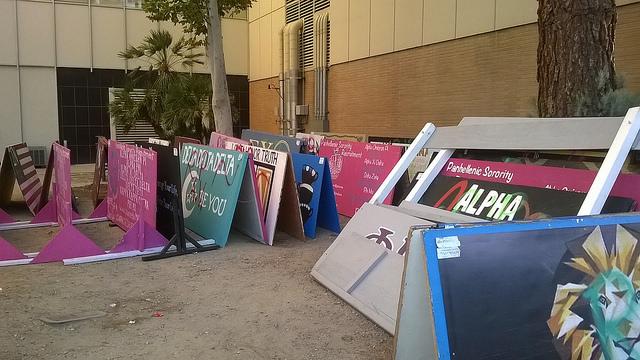 A number of Greek organizations’ sandwich board signs were vandalized in front of the Oviatt Library Tuesday night.

Spray-painted messages containing the letters “R-I-P-A-V” were found on both fraternity and sorority boards this morning.

This past summer Villa died on a fraternity-sanctioned hiking trip.

Hugo Valencia, Phi Delta Theta member, said the acts were “ignorant and misinformed.” Although the sandwich board for Phi Delta Theta was damaged, Valencia said it is unfair that all Greek organizations are being targeted for something that happened within another organization.

Since Villa’s death, the Pi Kappa Phi chapter at CSUN was suspended following an investigation.

CSUN responded by requiring fraternities, sororities and other similar student groups to submit details in advance about the types of activities planned and the students who will be responsible.

Many fraternities and sororities have also revisited their policies surrounding new member recruitment.

Valencia said Greek organizations now have a more structured process surrounding the recruitment process, including an online seminar that informs new members of their rights and introduces them to the organizations guidelines.

No suspects have been identified in corroboration with the boards that were vandalized on campus.

Please report any incidences of vandalization on campus to CSUN Department of Police Services.