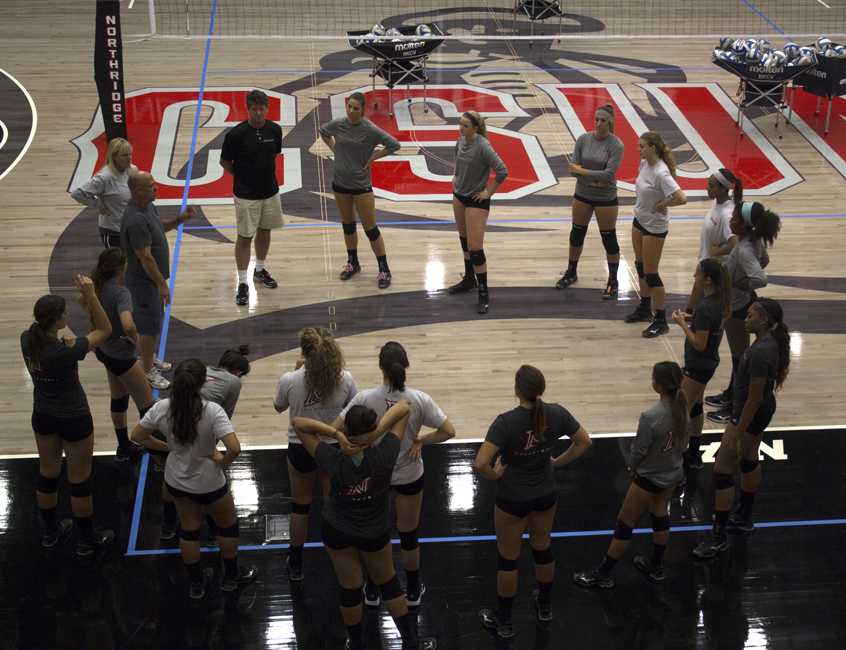 The women's volleyball team has their eyes set on a conference title after winning the Big West championship last season, and earning a top five conference ranking. "[Women's volleyball team] are very focused, very dedicated, they stick by each other and I am excited for this season," said head coach, Jeff Stork. Photo credit: Trevor Stamp/The Sundial

Candice Criss
With their first-ever Big West Conference Championship and an a 2013 NCAA tournament appearance under their belts, the Matadors are determined to build on the last season’s success as they have already received a top-five ranking in the 2014 Big West Preseason Coaches Poll.

Head coach Jeff Stork is excited about the team’s high ranking but wants the team’s focus on winning another conference championship.

“Going into the season, we’re happy with where we are,” Stork said. “But a ranking, at any point, is just a ranking, there is no guarantee to anything.”

11 lettermen from last season will be returning to bring the team’s goal into fruition.

Hinger, who finished last season with a team-high 357 kills, acknowledged that the Big West Championship was indeed historical.

“It was history for our school,” Hinger said. “We worked our butts off to get there and it showed.”

Hinger not only had success with the Matadors but also as an individual. She was selected to be a part of the U.S. Women’s Volleyball National Senior A2 Program and named the Big West Scholar Athlete of the Year.

Allen also had a successful season with 344 kills, 334 digs and became a First Team All-Big West player. With this being her last year as a college athlete, along with four of her teammates, she is determined that the team will do their best to repeat the collective success that they had last season.

“Our competition in practice is a lot higher than I thought it was last year in double-days,” Allen said. “If we just stick to our system, we will be good.”

Another player to keep an eye out for is Kaul, who ended the season with a top-10 hitting percentage in the Big West Conference.

“The dynamic in which (Kaul) brings to our systems that we play is invaluable,” Stork said. “But she may not get the recognition that the conference shows other players.”

“Every single one of them is going to help us whether they are on the court or not,” said Kaul. “Each one of them is a huge contribution to our team.”

Stork said that the incoming freshmen are doing a great job adapting to the college-athlete experience.

The Matadors are working to become an all-around better team by not only preparing physically but by bringing back sports psychologist, Aaron Weinstein, to improve their mental preparation.

“There are a lot of things that we work on which will help them prepare themselves, make them learn better and quicker, and also handle the more difficult situations that might occur during the season,” Stork said.

With the new season right around the corner, the Matadors are going to make it a memorable one.

“We have a few records being broken this year,” Kaul said. “I think Casey (Hinger) is going to hit a thousand kills at some point,” Kaul said. “A couple of our hitting percentages are going into the top-10 and hopefully we will get ranked at some point again.”

Stork said he also expects the upcoming seasoning to be more memorable than the 2013 season.

“I have that much confidence in these players. They are very focused, very dedicated, they stick by each other and I am excited for this season,” Stork said.

The Matadors continue non-conference play until their home-opener against Hawaii on October 10.

You can view a complete photo essay about the Matadors online.