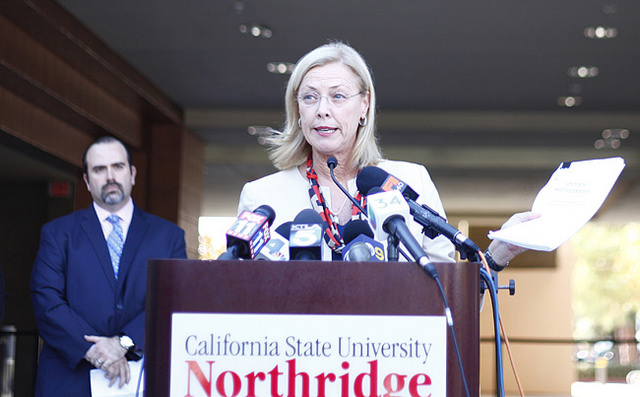 President Dianne F. Harrison holds up a copy of the report on the Pi Kappa Phi Fraternity incident at the University Hall on Friday, September 5, 2014 in Northridge, Calif. The fraternity Pi Kappa Phi chapter at CSUN has been forever removed from the university following the death of Armando Villa. (Photo credit: David J. Hawkins/Daily Sundial)

>>CORRECTION: An earlier version of this story incorrectly stated that the press conference was on Thursday, rather than Friday.

The Zeta Mu chapter of the Pi Kappa Phi fraternity has been voluntarily surrendered by the national organization following CSUN’s investigation into the death of Armando Villa, President Dianne Harrison said Friday during a press conference at CSUN.

Harrison said once the university received their final report on the investigation into Villa’s death on a fraternity-sponsored hiking event, CSUN contacted the national chapter.

The national board of directors of Pi Kappa Phi agreed with the student chapter in voluntarily surrendering the CSUN chapter, according to Harrison. Immediately following a signed agreement from Pi Kappa Phi, Harrison and Vice President of Student Affairs and dean of students William Watkins called Villa’s parents and informed them of the decision, Harrison said.

“The report findings are deeply disturbing,” Harrison said. “It is clear from this report that members of Pi Kappa Phi, without knowledge of the university, engaged in hazing, in violation of the CSU student conduct code, and CSUN’s code of ethics for recognized student clubs and organizations.”

“It’s been 67 days since we lost him,” Castaneda said. “And so its very frustrating and its very difficult to see your family live it out each day, each moment. But it’s a beginning and I’m glad a very strong message is going out to other fraternities and sororities.”

“I will not turn a blind eye to hazing,” Harrison said. “Hazing is stupid, senseless, it is dangerous and it is against the law in California. It is a vestige of toxic thinking in which somehow it is okay to degrade, to humiliate, and potentially harm others. It has no place on this university, or on any university campus in any student club or organization and it will not be tolerated.”

Any individual student discipline is still pending the conclusion of the criminal investigation, but discipline could be as serious as expulsion from CSUN, Harrison said. Student names or potential penalties could not be released due to the Family Educational Rights and Privacy Act (FERPA).