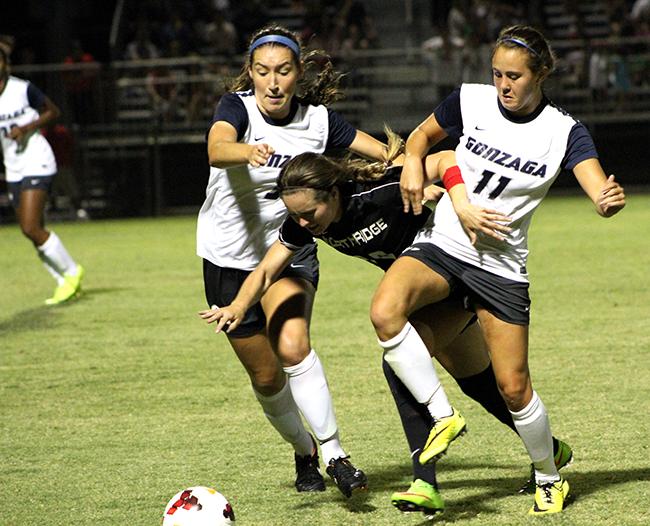 Brittanie Sakajian, senior, forward for the Matadors, battles off two opponents as she races towards the goal. Photo Credit: Trevor Talan/ The Sundial

CSUN (1-2-1) brought the energy back to Matador Soccer Field with a victory over Gonzaga (3-2-0) in their 2014 home opener Friday night. Pushing hard in the final moments of the match, the Matadors crossed a ball deep into Bulldog territory to be headed in for an own goal by Gonzaga in the 89th minute.

With what seemed like a match going into overtime, late pressure by the Matador offense caught the Bulldogs off-guard deep in their own net. In a rush to end the match in regular time, the Matadors lobbed a cross in front of Gonzaga’s cage that would be headed in by one of their own, defender Lauren Luke.

Despite three losses on a demanding away schedule to start off the season, the Matadors pulled through for the victory and a much needed morale boost.

“It’s definitely going to propel us into the next few games and into season” said Matador sophomore goalie Cynthia Tafoya, “We’ve been away for two long weeks and it’s been really rough traveling. Just having the support of our fans and being under the lights is a great experience for us.”

Tafoya took away two saves for the night, bringing her season total to 13, highlighted by a diving stop from a header in the 61st minute. This is her second shutout of the season and fourth in her career.

With 12 shots on goal by each side, Matador fans were not disappointed as the bleachers erupted in cheers at every turn.

Although each team posted the same amount of shots on goal, CSUN posed the deadliest threat from the start as Senior forward Brittanie Sakajian scrambled for the ball against Gonzaga goalie Christie Tombari.

Sakajian led the Matadors in attempts with five shots on goal followed by an impressive performance by freshmen forward Cynthia Sanchez who shot three on goal as well.

“It was huge for us to get to get our first home game, first win, we really needed it as a team” said Sakajian post-match.

Now with one win in the bag, the Matadors strive to bring the energy of Friday night’s victory to their next home game against San Diego this Sunday.

“We’ve got to bring that same energy on Sunday with more quality though,” said CSUN women’s soccer head coach Keith West, ” I think we put a lot of energy into our physicality and not into our quality.”

The Matadors return hungry for another win in their next home game this Sunday September 7th against San Diego at Matador Soccer Field. Then it’s back on the road for the Matadors as they go up against two Midwestern match ups starting Sept. 12 against Kansas at 3 p.m. (PT) and two days later against the Missouri Tigers at 10:30 a.m. (PT).