AS begins meeting with moment of silence for Armando Villa 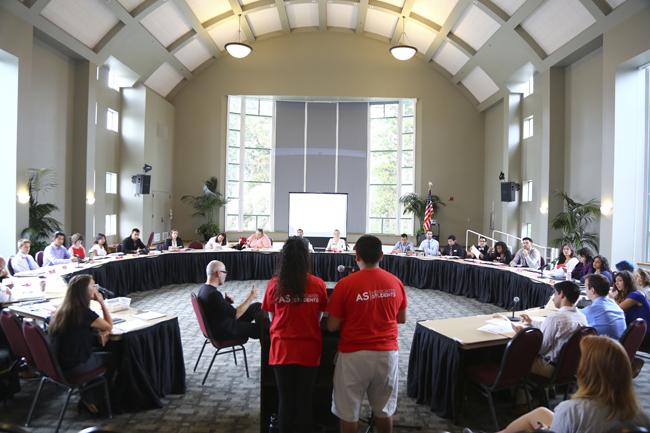 Tiffany Zaich, Associated Students (AS) president began today’s AS senate meeting with a moment of silence for Armando Villa, who died while on a hike with fraternity Pi Kappa Phi.

The incident has brought attention to hazing and the national fraternity has since surrendered their CSUN chapter.

“Our condolences go out to the family,” Zaich said. “It’s very unfortunate we have lost a student, here at CSUN.”

“Due to their behavior and conduct, which is not appropriate, that they will never be able to have such an organization at this institution,” Allen said.

During the meeting’s open forum, Unified We Serve (UWS) presented the San Fernando Valley Rescue Mission with a check for $2,311. The mission burned down earlier this year and UWS has been helping them repair their facility. UWS also partnered with AS for Summer Moviefest by providing student volunteers.

“Perhaps we haven’t served the community closest to home,” Steingraber said. He also spoke about offering rush tickets to students for upcoming performances.

“Starting every Tuesday, if you go to the VPAC box office you can get tickets for that week’s performances for just $12,” he said.

Funds were also approved for AS Marketing, Chicanos for Community Medicine, and the CSUN Ceramics Guild. The next AS meeting will take place Monday at 9 a.m. in the University Student Union Grand Salon.