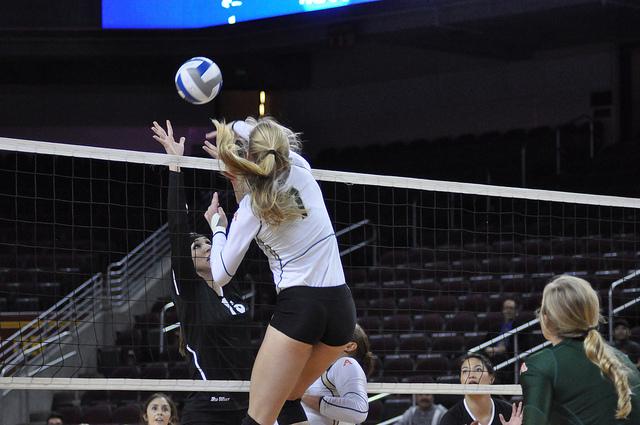 Matadors' best efforts not enough to keep undefeated season alive against the No. 23 Arizona Wildcats.

Over the weekend, the Matadors participated in the Arizona Invitational in which they were issued their first loss of the season.

They started off strong by winning their first two matches against Loyola of Chicago Wolf (2-2) and Alabama State University Hornets (2-4) but could not keep the momentum against the No. 23 Arizona Wildcats (6-0).

This loss sets the Matadors at 5-1 while the Wildcats remain undefeated.

Although the Matadors fell short in each of the three sets played against the Wildcats, they still put on a nice performance.

Sam Kaul, middle blocker, made seven kills and an impressive hitting percentage of .700.

Senior middle blocker Casey Hinger and junior Danetta Boykin, outside hitter, both completed a team-high of 8 kills with the assistance of, junior setter, Steffi Miller. Miller ended the game with a total of 31 assists, two blocks and two digs.

Kelcie Randazzo picked up 14 digs and Katie Sato’s digs added up to a total of 11.

The Matadors played hard enough to keep Arizona’s leads close but could not seem to stop the force of Pac-12 Offensive Player of the Week Madi Kingdon. Kingdon played a match-high of 23 kills and had a hitting percentage of .286 on 56 attacks, according to Go Matadors.

No matter the player or the lead Arizona had, the Matadors put up a fight during every set, especially the third.

Arizona started the third and final set with a score of 19-15 until junior outside hitter, Cienna Stinson, Hinger and Kaul made kills that sent the score into an even 19-19. The Wildcats answered with two back-to-back kills that gave them enough room to maintain a comfortable lead and finish the set with a 25-22 win, according to Go Matadors.

Before the loss to the Wildcats, CSUN defeated Alabama State 3-0 without trailing in the entire match.

Freshmen Lauren Conati, setter, and Rachel Diaz, middle blocker, both made their Matador debuts in the dominate performance. Conati recorded her first four kills as well as 25 assists against the Hornets.

The result was a 3-1 defeat of the Wolf.

The Matadors’ next appearance will be at the Nike Invitational in Norman Okla. on Wednesday.