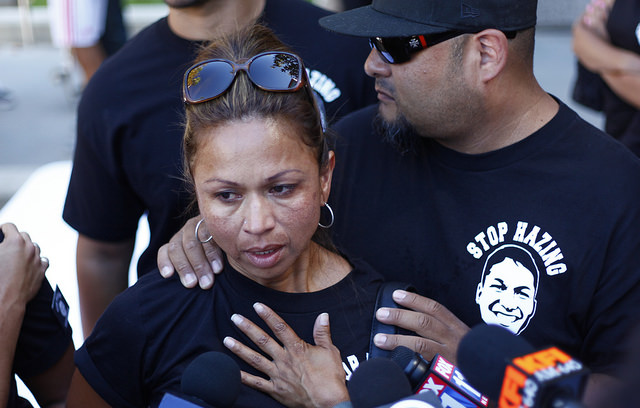 Jamie Chastened, Right holds Maria Casteneda, Armando Villa's aunt as she speaks to the press after President Dianne F. Harrison reads the report on the Pi Kappa Phi Fraternity incident at the University Hall on Friday. The fraternity Pi Kappa Phi chapter at CSUN has been forever removed from the university following the death of Armando Villa. (Photo credit: David J. Hawkins/Sundial Staff

The investigation report released Sept. 5 into the death of CSUN student Armando Villa stated the fraternity subjected pledges to boot-camp-like conditions and made them “promise not to die.”

Zeta Mu pledges were pressured to eat disgusting food and instructed to put on a condom before going to meet a barnyard animal named Betsy, according to the report.

Villa died after passing out on a hiking trip in the Angeles National Forest July 1. Hazing and denial of water were alleged by the student’s family, according to CSUN’s investigation report.

“It is unimaginable that their son’s death occurred while participating in a fraternity activity,” CSUN President Dianne Harrison said in a release.

The weekend Villa died, pledges were required to attend a mandatory hiking trip before being sworn in. During the trip, they were kept up until around 3 a.m. and given a short amount of time to sleep.

Pledges were subjected to “a lot” of physical activity before setting out on a 16-mile hike near Big Tujunga Canyon, according to the report.

While hiking up the mountain, the group had a limited amount of water and conditions became dire as they reached the top of the mountain.

On their way down the group split and some of the healthier members went ahead to retrieve water. Villa got ahead of everyone else and was later found lying on the side of the road in distress.

Upon finding him, fraternity members removed his shoes and attempted to revive him. Villa was pronounced dead later that day.

There was no evidence that the pledges were deprived of water and forced to walk barefoot, but Villa was given ill-fitting shoes that damaged his feet, according to the report.

Zeta Mu, which is a chapter of the national Pi Kappa Phi organization, was suspended shortly after Villa’s death and disbanded Sept. 5 at the request of school officials.

Villa’s family said that they still feel that they do not have all of the answers regarding that day.

“They talk about a fraternity being a brotherhood based on honor, but neither the local chapter, the nation parent organization of Pi Kappa Phi nor any of Armando’s so-called brothers have done the honorable thing by telling us what happened to our son,” Betty Serrato and Joseph Serrato said in a release.

For Villa’s family there is a long way to go before hazing is no longer a problem. They passed out bottles of water to CSUN students and advocated against hazing during the campus’ rush week.

“Hopefully a lot of other fraternity groups here on campus are aware that it’s getting serious,” said Efrain Lopez, Villa’s cousin.

Supporters of Villa advised that if students are subjected to hazing that they speak out about it or contact the proper authorities.

“Hazing is stupid, senseless, dangerous and against the law in California,” Harrison said in a statement released Sept. 5.

Under the California state law hazing is defined as any initiation act into a student organization that is likely to cause serious bodily injury to a student. It is punishable with up to one year in a state prison.

The only states that do not have anti-hazing laws are Alaska, Montana, South Dakota, Hawaii, New Mexico and Wyoming.

CSUN, in compliance with law, has restrictions against hazing and encourages students to report any acts.

Most universities across the nation have restrictions regarding hazing, whether they live in a state with a law against it or not said Charles Hall, executive director of Hazingprevention.org.

There is no evidence to suggest that hazing has increased in the past 10 years, but more people are aware of what hazing is, he said. “We know more about it and people are being more resistant to those type of situations.”

As to why people subject themselves to such conditions in an effort to achieve recognition from a fraternity, Hall said it’s a matter of human nature.

“They want to become a part of some organization,” he said. “There is a human instinct to belong.”