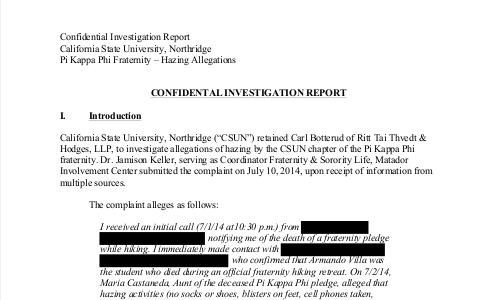 The CSUN investigation report on the Pi Kappa Phi Fraternity hazing allegations was released Sept. 5 by the university administration. The report concludes that the Zeta Mu chapter of Pi Kappa Phi at CSUN engaged in various instances of hazing over the years. Specific reports of hazing in the past year, including the Spring 2014 semester, are listed below. The hiking trip in which Armando Villa passed out and later died was the “Super Awesome Weekend” hiking trip, which took place July 1 and was the final activity of the pledge period. You can view the full report below.

Pledges were forced to:

Before departing for 2014 Retreat One, pledges were asked to “promise not to die”
Answer questions about Pi Kappa Phi history correctly. Incorrect answers resulted in being yelled at and forced to do push-ups and planks on elbows instead of hands
Served hot dogs overloaded with condiments, both traditional and non-traditional; past examples include sardines, pickle juice, Flinstone gummy vitamins, hot sauce
Forced to eat hot dogs in three bites with one hand. In Spring 2014, pledges who didn’t finish eating had to turn plates over their heads
Forced to sleep in a single tent. In 2014, approximately 18 pledges were forced to sleep in a tent estimated to have a 4-8 person capacity
During Retreat Two in Spring 2014, pledges who did not finish hot dog breakfast were told to pour remainder of meal down their pants
Forced to do an “elbow crawl” at a “big rock” hiking spot – pledges had scraped, bloody elbows
Told to put on condoms to meet “Betsy,” a farm animal. Pledges were blindfolded and taken to a location believed to be a barn, which was relvealed to be a diner with a waitress named “Betsy.” The group ate dinner and the retreat ended.
There was no forced drinking of alcohol during retreats.

Pledges given quizzes, physical training until 2-3 a.m.
Slept in garage, back-to-back on top of sleeping bags, received little sleep before hike
Purchased shoes at “3 for $20′ store … described as ‘Vans type slip-ons'”
Armando Villa and another pledge were given shoes too small for their feet
Each pledge was given a gallon of water and group was given a case of water to share
Group reached top of trail “around mid-day” amidst hot weather
Some pledges began to suffer symptoms of heat stroke, heat exhaustion
Villa had “particular trouble” with shoes, ran ahead past everyone else
Was discovered near trail lying on side of a road, “in great distress and very hot” when first responders arrived
No evidence pledges were forced to walk barefoot or were deprived of water

You can view the full report here: