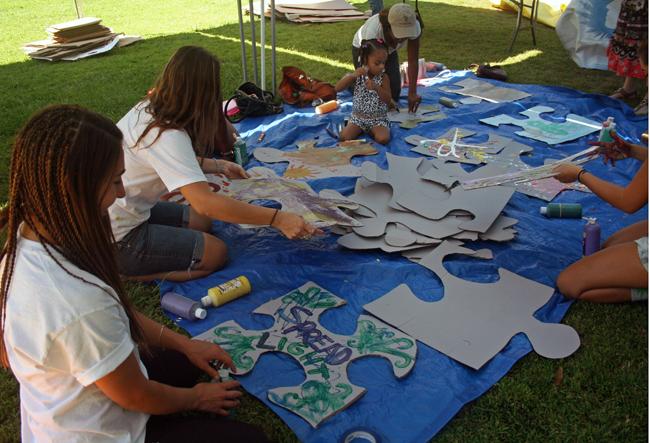 "Jusdeep would want us to always take advantage of the opportunities given, and to learn to build a community for ourselves," said Marissa Phillips, a friend of Jusdeep, senior and Music Therapy Major.

Students flocked to the Matador Square Wednesday afternoon to remember the legacy of Jusdeep Singh Sethi, a CSUN interdisciplinary humanities student who passed away last year at Big Bear Lake.

Dozens of campus organizations and outside entities participated in what has become an annual block party featuring music, spoken word, art installations and free food throughout the afternoon.

In attendance was Sethi’s brother, 25-year-old Mandeep Sehti, who still feels adamant about his brother’s ability to create a unified body from diverse factions.

Master of Ceremonies for the event and CSUN alumni Jonnae Thompson still sees Sethi’s influence around campus more than a year after his departure.

“A lot of people will tell you, you definitely still feel his spirit and presence and energy even in bring things like this together, it just makes sense,” Thompson said. “It’s all pretty diverse, there’s an even amount of representatives from current students, student alumni, family members, local artists- all of his world.”

Passing students were educated not just about Sethi’s story, but also the dynamic culture that he instilled to the campus community, reaching both new and returning students.

Eighteen-year-old freshman Eric Morales could feel the inspiration left by such a unique member of the community.

“I was just walking around and I saw this block party sign up,” said Morales. “People like him after they pass away, the character, something about just lives on and it’s apparent in today.”

Sociology student Emilio Carrillo was drawn from class to attend the event.

“My professor, Dr. Olsen, said it was extra if we came out so I thought I’d stop by and check it out,” Carrillo said. “I like the art, it seems pretty interesting. There’s some cool dancing and good music.”

But even after the celebration ends, Sethi still understands the need to continue his brother’s quest for social justice.

“We know that education doesn’t happen just in the classroom, and that why we have a campus and there is a campus culture too,” Sehti said. “Eventually new students will come and they won’t know whom my brother is but they can still experience the same type of energy, and creativity and culture that he was trying to share.”