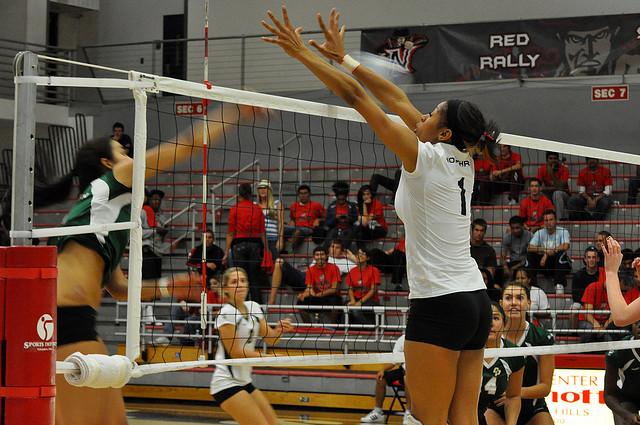 Casey Hinger’s kill in the start of the game set the tone for the rest of the sets to come but the only thing that got in the way of the Matadors first set win was the Sooners’ Kierra Holst. Holst served four straight aces after her teammate completed a kill, giving her team a significant lead of 9-1.

That lead would last for the rest of the set which concluded with a score of 25-13.

Set two had the same start as the first with a kill by Hinger, except this time the Matadors would take this set (25-23). Most of the second set consisted of Oklahoma having to do a lot of answering back to kills from the likes of Cieana Stinson, Sam Kaul, Danetta Boykin and Hinger.

Each team won a following set with 27-25, forcing them to play a fifth and final set.

Following a 9-9 tie, the Sooners produced two consecutive kills and a co-block on Kaul that gave them a 12-9 lead. That lead sealed the fate of the Matadors as they lost the set 10-15.

Despite the loss, the Matadors put up some good numbers. Hinger produced a team-high of 16 kills, had 13 digs and six blocks. Stinson had 12 kills and four blocks while Kaul added 11 kills and .450 hitting percentage, according to Go Matadors.

This game also put Kelcie Randazzo and Natalie Allen in double figures in digs with 19 and 14 respectively.

The Matadors will be playing against Portland State today at 3 p.m. for their second match of the Nike Invitational.