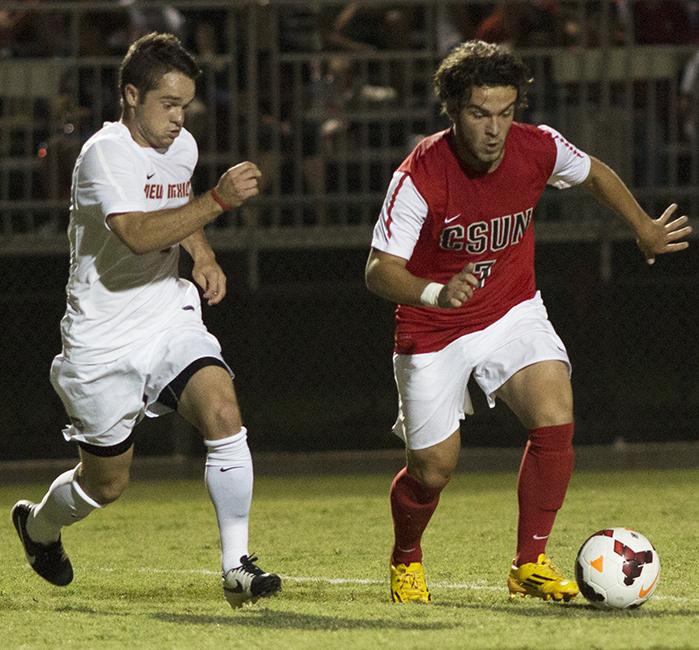 Junior Marino Peixoto dribbles his way through the New Mexico Lobos' defense for the Matadors in their home opener on Friday night. The Matadors had no luck scoring a goal, falling 1-0. Photo credit: Trevor Stamp/ The Sundial

The Matadors’ (2-3) late rally was not enough to hold off the No. 8 New Mexico Lobos (3-1), as the Matadors failed to reward a crowded home stadium with a goal in the seasons’ home opener.

The final result was a bitter 1-0 defeat for CSUN.

New Mexico Midfielder Chris Wehan picked out a loose ball in the penalty box and curled it in passed junior goalkeeper Adam Hobbs in the 19th minute to give the Lobos a win over the Matadors.

“They bent, but didn’t break,” said Head Coach Terry Davila, whose Matador side couldn’t capitalize on multiple chances to get on the scoreboard.

The first half started off slowly for the Matadors, who could not handle possession as easily as they wanted. New Mexico enjoyed possession for most of the half, and bombarded the Matadors with chance after chance, most of which didn’t look too dangerous.

The Matadors didn’t have a good chance until the 13th minute. Senior forward Edwin Rivas capitalized on a New Mexico turnover but had his shot blocked.

The Lobos quickly countered, but Hobbs made a save to keep the Matadors in the game.

Miscommunication in the penalty box left a loose ball ripe for the taking. Wehan struck the ball passed a distracted Hobbs and gave the Lobos the lead that would stand all game.

The second half saw a reinvigorated Matador side who struck instantly. New Mexico experienced the same kind of pressure they gave the Matadors in the first half, but managed to keep the clean sheet.

The Matadors had countless efforts, but weren’t able to capitalize. Their best chance came again with Rivas. The forward dragged out the Lobos goalie and slotted in a low cross toward two Matador forwards with an open goal, but they weren’t able to reach the ball in the end.

The team continued to pressure the New Mexico defense until the end of the game, but came out empty-handed.

Coach Davila and the rest of the Matadors defend their home stadium again be on Sunday as CSUN will host Bradley at 4 P.M.