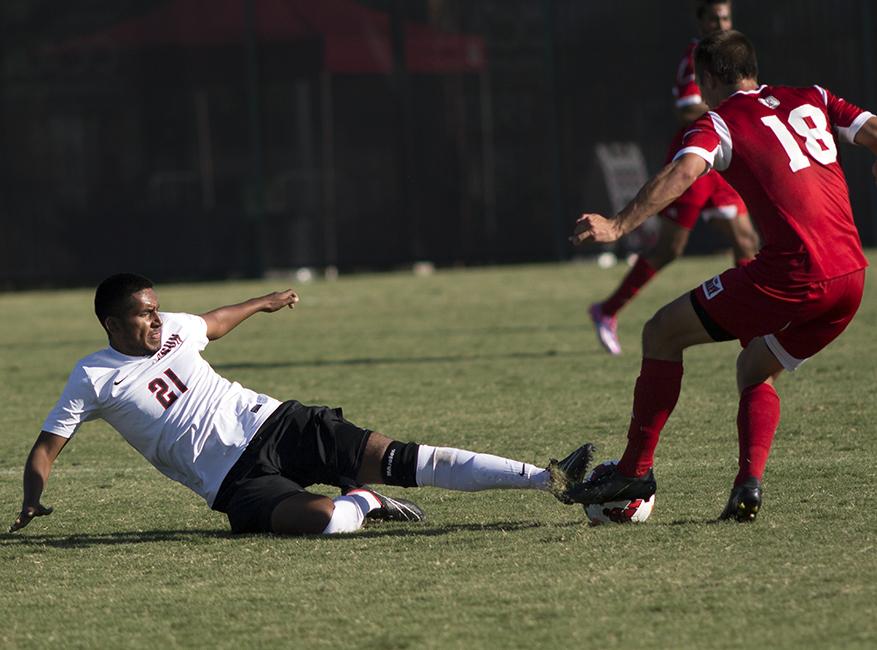 Freshman Kevin Martinez tries to win over the ball with a slide tackle for the Matadors during the team's Sunday scorcher against the Bradley Braves. The Matadors pulled out a 1-0 win in the second overtime period. Photo credit: Trevor Stamp/The Sundial

Cheers exploded from the sideline as the Matadors (3-3) rushed the field to grab forward Sagi Lev-Ari following his golden goal in double overtime Sunday, to defeat Bradley University Braves (1-4), 1-0.

The only goal of the match came seconds into the second overtime period as Lev-Ari found the back of the net after midfielder David Turcios found him on the left-side of the field where Lev-Ari finished the play with a strike at goal.

“It is the best thing in the world,” Lev-Ari said. “Everyone wanted the (win) and we worked so hard in 100-plus degrees; I am glad it was me who scored the goal.”

The first half was quiet as both teams tried to stay cool in the blazing sun. Both coaches substituted players in and out every 10 minutes and the officials stopped midway through both halves to give the teams a water break.

In the second half, the Matadors continuously made efforts to score but the shots were too wide off the net or way over the crossbar. Lev-Ari, Turcios and Edwin Rivas came close to scoring on multiple occasions but none of their shots went through.

CSUN ended the match with 27 shots at goal compared to Bradley’s 11.

Coach Terry Davila said he was concerned about his team not finishing its chances around the box.

“We created enough chances to win the game,” he said. “(But) we got a little wild on our shots and that is something we have to work on in practice.

Bradley gave the Matadors a challenge either from its players creating scoring chances or its goalkeeper, Logan Ketterer, denying CSUN’s shots. He finished with five saves while Northridge’s goalkeeper Adam Hobbs had three.

The dramatic finish was not the first time happening between these two teams. Last year CSUN defeated Bradley in the last minute of regulation.

“You have to be able to execute against them,” Davila said. “We knew it was going to be a hard game; we were more concern about this match than the New Mexico match.”

Next for Northridge is a match against the University of Nebraska Omaha at Cal State Fullerton on Friday, Sept. 19 at 5 p.m.