Rise in MTA fares will not benefit students 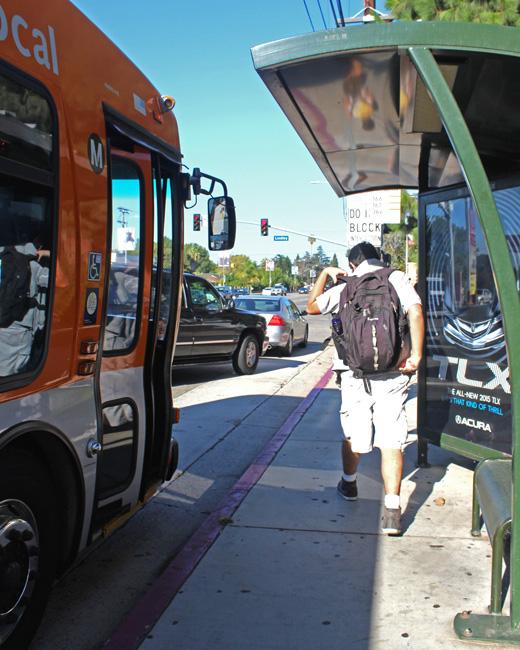 The MTA bus and rail rates are rising to a total of $1.75. CSUN student Luis Arrellano, 21, junior, graphics design major, says he rides the bus almost everyday. "It is a little more harder to get the money to get on the bus, I saw less people today", Arrellano said. Photo Credit: Araceli Castillo/Photo Editor

It looks like many students who ride on the Metro are going to have to find new means of transportation starting Sept. 15. Unless riders want to empty their pockets even more, it is best to get out while they still have the chance. How will these changes in prices benefit Metro customers? The increase in fare hikes will have students pay more money to ride on the buses, or students will have to find alternate means of transportation.

With many students taking the bus to school, it is just another expense that students have to pay for. Let’s face it, attending a university is great but when it comes to the cost of everything, students are not made of money. We have to pay for books, parking permits and tuition. Eventually everything just racks up. Some of us have to work several jobs just to keep up with total expenses. Just like everything else riding the bus to school will now involve spending more money.

Although Metro has various means of transportation, the bus and train fares seem to be of most concern to students at CSUN.

Base fare will increase from $1.50 to $1.75 according to Metro LA’s website. A 25 cent raise may seem like a small number, but it does make a difference in our bank accounts.

However, it’s not just the boarding fee that’s getting raised.

A $25 increase just sounds absolutely ridiculous to me. Having to pay $100 every month is too much to ask of anyone. That money would be enough or less than enough to pay for textbooks for the whole semester.

Regarding TAP cards, Metro is willing to include free transfers for two hours. However, when the first two hours are up, fare prices will continue as normal. The fact that Metro is trying to be fair to its riders by allowing free transfers is decent. But then again, we also must consider that two hours on a bus includes several stops before they reach their destination. That two hour window doesn’t really make a difference.

With the increase of prices going up, I know that I would probably find another way to get to school. Do not spend the extra money and simply carpool with a friend. This would be more convenient compared with having to stop every 15 minutes or so. If students were to take the bus they would be spending about 38 extra hours in traffic as opposed to using the carpool lane. Not only will students be saving time, they will be able to split the cost.

When thinking about the fare hike prices going up I often wonder how long it will be until Metro decides to raise its prices even higher. Sure the increase in prices isn’t that much, maybe a few extra dollars. That’s how it always starts. Who is to say that prices won’t be even higher in the next year or two? Things are changing all the time. Some things change for the better and others for the worse. As students, we have no control of how Metro decides to run its business, but we do have a say in how we get to school.