Halloween Horror Nights is among us! 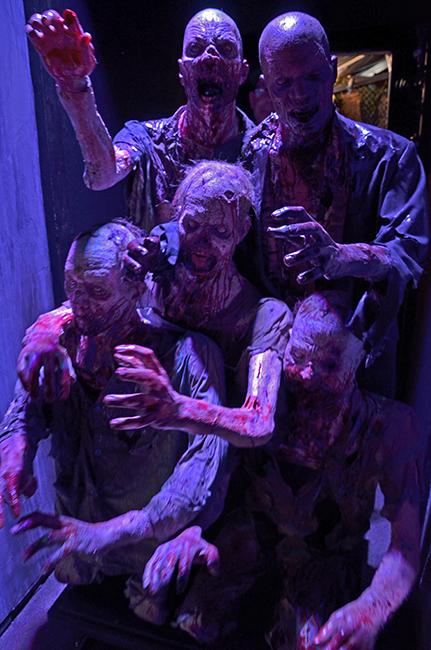 "Walkers" not only infest the prison in season four of "The Walking Dead" but the maze for "Horror Nights" at Universal Studios Hollywood. The props are realistic as the performers that will appear around in the labyrinth. Photo Credit: Vince Nguyen/ The Sundial

Imagine blood thirsty clowns roaming around trying to find recruits for their ice cream factory. Or trying to survive a post-apocalyptic world infested with zombies or imagine what it’s like to be a tourist bitten by a werewolf?

This year’s Universal Studios Halloween Horror Nights will include all of the above, and it will be one hell of a ride.

Creative Director and Producer John Murdy, who has been doing “Horror Nights” for 20 years, has come up with yet another set of scare tactics and mazes to give guests the best and most fearful experience yet.

Here’s a preview for three mazes that will be featured for 22 nights at the theme park.

This year’s new maze, “Clowns 3D Music by SLASH,” is probably the most exciting and freakiest of the tour.

The maze has a backstory telling the tale of “Sweet Licks” and his family of clowns who lure people into their ice cream factory where they are either killed or recruited to become one of their factory employees.

“Sweet Licks,” whose voice over is done by Murdy himself, runs his business with his daughter and son.

Murdy came up with the idea from two stories he heard on National Public Radio.

One story covered coulrophobia, the fear of clowns, and mentioned 10 to 15 percent of Americans have this disorder. Another was about a diet trend, specifically, ice cream.

Grammy Award-winning musician Slash composed the theme music for the maze. As guests walk through the terrifying labyrinth, Slash’s psychedelic music will be played throughout the maze and is in sync with each scene inside.

This year, Murdy has made the entrance’s 3-D effects more elaborate by painting not just the walls, but the ceiling as well. The guests will experience the effects around them as the warm colors go toward you while the cool colors give a receding effect.

Among the effects-filled rooms are a combination of props and performers, whom Murdy helps train and coordinate, to give guests the right kind of scare.

Murdy always uses top Hollywood quality props to give guests the best experience. For those really looking to get a fright from their night, check out the  “The Walking Dead: The End of the Line” maze.

“The actors from the show would come here and preview the maze and say they feel like they’re back on set,” Murdy said.

This is the third year Murdy’s crew has collaborated with the AMC fan favorite.

The maze is based on the latest season of “The Walking Dead,” with the maze designed exactly like the prison sheriff Rick Grimes and company resided.

Like the series, the maze will be infested with the deadly and fearful “walkers” that have dominated the earth.

Season four introduced a new virus that turned humans into zombies who bled through their eyes and other orifices. This maze is filled with them.

Murdy recreated “Cell Block D” using props from other movie sets. He used real prison doors and even worked closely with “The Walking Dead’s” executive producer Robert Kirkman to get every part of the prison down as close as possible.

The performers are covered in prosthetic make-up, much like the “walkers” in the show. More than four thousand pieces of prosthetics are used for the year.

Every performer undergoes rigorous training through the “Scare Academy” to become “scaracters.”

Following the audition to join the academy, the actors are then trained by Murdy.

While “The Walking Dead” maze is sure to give a realistic thrill to maze-goers, nothing is more true to its adaptation than “An American Werewolf In London” maze.

Based on John Landis’ iconic horror film about Americans succumbing to werewolf bites, the maze is nearly an exact replica of the film.

Murdy worked closely with Landis and Academy-Award winning makeup artist Rick Baker to get everything from the sets to the performers costumes right.

The guests are taken through the maze, with each scene from the movie where the werewolf attacks, to the multiple nightmares seen in the film.

The transitions to different scenes are accompanied by a sensation that Murdy designed to give it a haunted house feel. A simple trick, but it works very well to make the guest incredibly uneasy.

“Every year we come up with something different and better to mess with you guys even more,” Murdy said when he described the maze. “We want to make it as real as possible.”

Murdy stays true to his word with the best part of the maze: the pornographic theater. The entrance is subtle, and looks like a typical, harmless movie theater. As you enter, you are immediately introduced to a theater full of dead and bloody props that will give you the chills. And to make it even worse, there will be performers in the audience that will pop out at anytime.

Other mazes include,“From Dusk Till Dawn” and “Dracula: Reign of Blood.” The “Terror Tram” and “Scare Zones” are back in action this year as well. However, The “AVP: Alien vs. Predator” maze is perhaps the most intriguing.

To see all these awesome attractions you can purchase a discounted ticket at ushtix.com/csun.