Stinson killing it for the Matadors 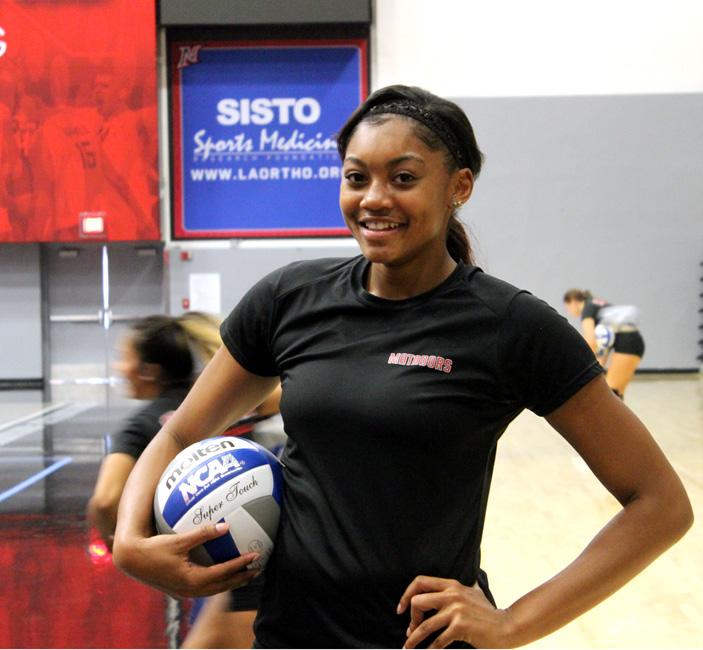 When Cieana Stinson started her freshman year of high school she wanted to be a cheerleader but thanks to a very persuasive coach, this Big West Player of the Week awardee turned to volleyball and never looked back.

Stinson, who is now in her junior year of college, has made an impact on the Matadors’ season so far with her impressive attacking skills. She is currently the top player on the team for kills per set with an average of 3.12 for the season.

Head Coach Jeff Stork has noticed that Stinson has become one of the team’s more dominant attackers and said that she is continuously working on becoming better.

“Cieana is developing as an all-around player,” Stork said. “She has extremely good length, she has a very good motion and when we can get her in good situations, good things tend to happen attacking.”

Stinson’s breakout performance of the season was during the Matadors’ three-game sweep of the UNLV Invitational where she took home the tournament’s MVP award.

“That was really surprising,” Stinson said. “I felt blessed and my parents were happy. I was really proud of myself.”

Like every athlete, Stinson does have things that she would like to improve as a player. Stinson has made note, after watching herself on film, that blocking is something that she needs to improve.

Stinson has averaged less than 15 solo blocks during each of her seasons with the Matadors.

“She is learning how to block a little bit better,” Stork said. “She’s working on those parts of her game.”

No matter how many kills or blocks Stinson makes, she finds it helpful to have a shoulder to lean on. That shoulder probably belongs to sophomore middle blocker, Stephanie Serna.

“She has an amazing personality,” Serna said. “I always have a good time with her and we have this really good friendship on and off the court.”

Friendship, food and volleyball are some of the things that Stinson considers to be important but she also stressed how much she appreciates the support from the Matadors’ fans.

“I want (our fans) to come to all of our games,” Stinson said. “Our first home game is coming up and the more people we have there, the more we will get pumped up.”

Stork is not shocked that Stinson has had such an impressive performance and expects her and the rest of the Matadors to keep getting better.

“(Cieana) is a tremendous attacker. There’s no doubt about that,” Stork said. “It doesn’t surprise us that she had that kind of start. We’re a very good team and (Cieana) is a big part of that.”