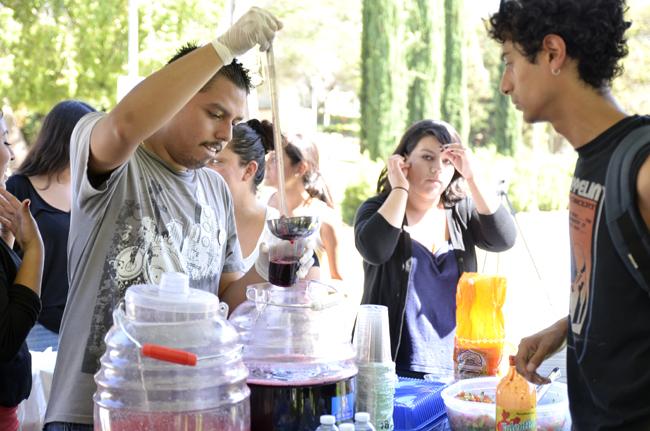 Students played games and ate food in celebration of the 45th anniversary of the Educational Opportunity Program (EOP) today.

Jose Luis Vargas, director of EOP, spoke at the event and said it’s important not only to celebrate the progress made with the EOP program, but to sustain that progress and continue to move forward.

“We don’t do this by ourselves,” Vargas said. “The support of the staff and the success of our students is what enables us to keep going year after year after year.”

Various school organizations were on the Matador Bookstore lawn promoting their services, recruiting members and fundraising by selling food and drinks such as pizza, carne asada tacos, slushies and water.

Some of the organizations present were the CSUN Gospel Choir, Dreams to be Heard, the Black Male Initiative Organization, and others.

Erica Vallin, senior liberal studies major, works in the advising center at the EOP office. She said that even though Cal State schools provided a better opportunity for all types of students to attend college, not everyone is represented.

“Unfortunately, it doesn’t support the neediest of the needy,” Vallin said. “So that’s where EOP gives people a chance and I’ve seen different people in the program who have grown through the program.”

Students participated in a jumbo version of the game Jenga, a ring toss game, an inflatable obstacle course, and a game in which students flipped cards with EOP facts and matched them to other cards with the same fact. Those who won the games were given prizes.

Harold Hellenbrand, provost and vice president of academic affairs, gave a message of cautious optimism to the attendees of the celebration.

Marvin Villanueva, director of the student services center in the College of Humanities, said EOP is important for all students to know about.

“When you come from a community where there is no college-going culture, and is not part of the conversation, we have something like EOP that really makes a difference and it allows students from those communities to be a part of this community here and really enrich the diversity of our campus,” Villanueva said.

“It really helps me out and I don’t feel too alone coming into college,” Hernandez said.