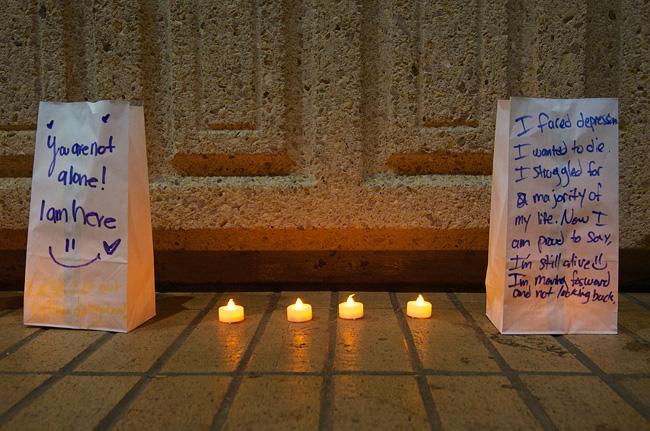 The Blues Project puts on a candlelight vigil for suicide victims back in November 27, 2012 at the Oviatt Library. Photo Credit: Ken Scaboro / Contributor

Samir Hamawe, 24, graduate student and the Blues Project instructor, remembers when a close friend told him he had tried to commit suicide.

More than 38,000 Americans commit suicide annually, and more than 20 million American adults battle depression every year, according to the American Association of Suicidology. Statistics also show that suicide is the third leading cause of death among people between the ages of 15 and 24.

When Hamawe realized he didn’t know what to do to help his friend in that situation, he decided to change that.

“At the time I did not have appropriate methods or knowledge on how to best understand his subjective worldview to better help him, and realized this was a huge problem,” Hamawe said. “Through my role as a graduate student in the college counseling and student services program, I had to opportunity to serve as the graduate intern/instructor for the Blues Project. My friend’s experience inspired me to do the work I do today.”

The Blues Project is a team of peer educators that educate students, staff, and administration on depression awareness and preventing suicide. Dr. Marshall Bloom founded the Blues Project over 30 years ago and since then it has continued on its mission to define depression and suicide, the different types of depression, and the biological and social influences, Hamawe said.

“The value in our program comes with the responsibility of being on the front lines with students on campus,” Hamawe said. “Peer educators are some of the first people to engage with students in crisis and ultimately bridge the gap between the student and relevant resource on and off campus.”

Students that participate in the program as peer educators present workshops on a weekly basis to CSUN classes, campus organizations and other institutions in the San Fernando Valley.

Jasmine Brown, 21, senior majoring in psychology remembers when she first saw a presentation by the Blues Project and the effect it had on her.

“It really opened my eyes and made me realize how serious depression is,” Brown said. “I have a friend who has been dealing with depression and I’m glad I understand a little bit more and know how to help or what to do when she comes to me for help.”

Hamawe believes that suicide is 100 percent preventable, but said that unfortunately not everyone can recognize some key elements of an individual in distress.

“I strongly believe that if faculty, students, and staff understand some of the characteristics that are around them in their everyday lives, appropriate action to ultimately save a life can be followed,” Hamawe said.

Stephanie Lerma, 21, majoring in psychology and president of the Blues Project believes mental health in general has a vast amount of stigma.

“Depression is a treatable medical condition and suicide is preventable,” Lerma said. “There are various resources available to everyone and I definitely believe that knowledge is power, and the more people know how to help others and themselves the less people we would lose to suicide.”

Lerma has been involved with the Blues Project for three years and values the ability to  educate students and the CSUN community on mental health as a peer educator.

“There are many things I love about being a peer educator, but my favorite thing about it is when I see that the presentation really meant something to someone,” Lerma said. “I want people to become supporters of mental health and take the information and act on it.”

As for the future, Lerma said she would like to see the program expand on different campuses.

For more information on the Blues Project or how to attend a workshop, go to the Blues project website. There you can find a variety of workshops available along with dates and times. In addition, the University Counseling Services (UCS) offers a wide variety of free therapy groups and psycho-educational workshops to currently enrolled students. Stay up to date with the Blues Project on their Facebook page.

Check out the rest of The Sundial’s Mental Health Issue in a special section here.