Matadome is the new Blacktop 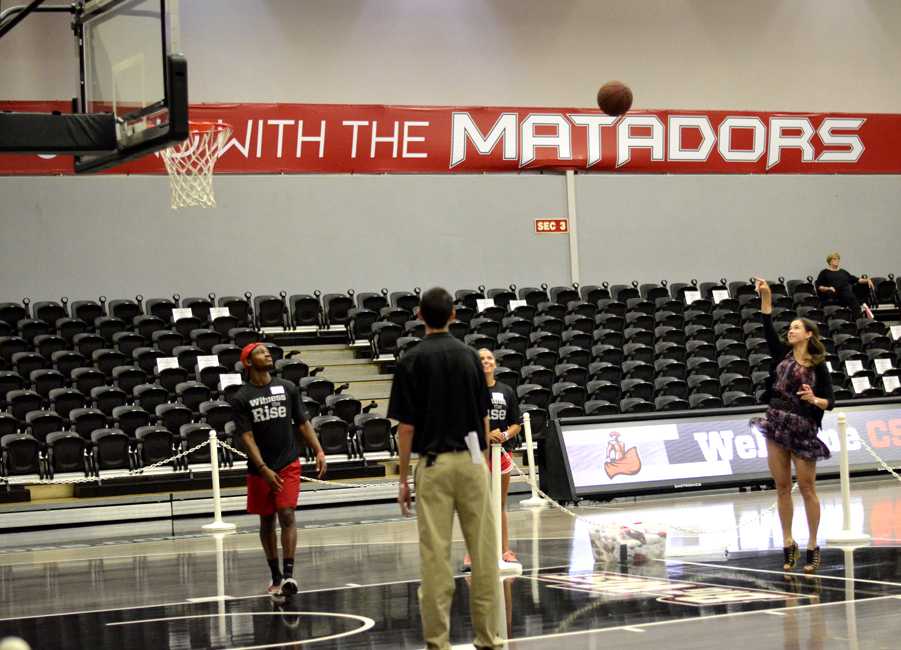 Michelle Almazan (far right), academic advisor for the CSUN basketball teams, shoots a basket in attempt to win a T-shirt during the Blacktop at the Matadome event on Thursday, Sept. 18, 2014. Photo Credit: Alex Vejar/The Sundial

The new floor of the Matadome was introduced to the faculty and staff on Thursday, Sept. 18 with the Blacktop at the Matadome event.

Brandon Martin, director of intercollegiate athletics, suggested the event was an important step in bringing the entire CSUN community together.

“We’re one team, one family, with one goal, and that goal is confidence and excellence,” Martin said. “We’re all trying to get to the same place. We all want to elevate CSUN. And this is a big piece of that.”

Coaches and players from various CSUN athletic teams were present, including men’s and women’s basketball, women’s volleyball, women’s tennis, and others.

Mike Robinson, employee of the CSUN IT department, said the event brings cohesion with all of the departments on campus.

“We need more of this kind of involvement,” Robinson said.

Robinson also said he liked the new look of the floor.

Attendees were treated to free hot dogs, chips and beverages with registration to the event. They also shot baskets in an effort to win free a CSUN T-shirt.

Directly outside the Matadome, the Matador Pep Band and the Matador Cheerleaders performed for people walking in to the stadium.

President Dianne F. Harrison was also in attendance, and even tried her hand at shooting a basket to win a T-shirt. But, she missed.

“I can do it, it’s just I’m not warmed up today,” Harrison said.

“What I really look forward to is seeing the opposing teams’ response to it,” Harrison said.

This is the second time in two years that the Matadome floor has been changed. In the summer of 2012, the floor was completely overhauled after a referendum was passed to make improvements to various parts of the campus.