Photos of the Day: Noontime Concert 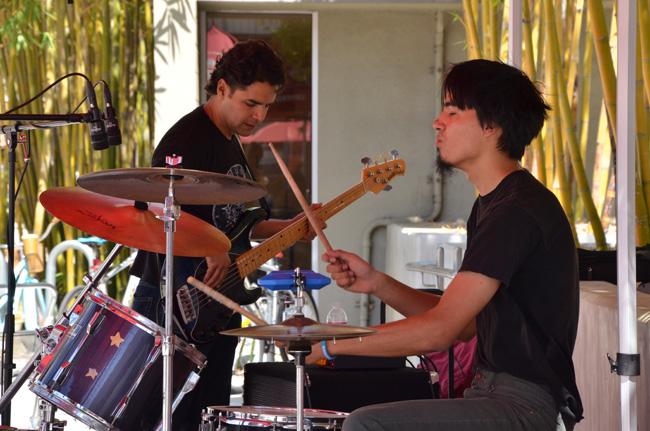 Alarma, an indie/reggae/rock group from Downtown Los Angeles, performed Thursday afternoon at the Plaza del Sol. The group consists of lead vocalist, acoustic guitarist and conga player Pedro Martinez, minor percussionist Alma Gonzalez, back-up vocalist and guitarist Alessandro Morosin, bassist Hugo Noyola, and drummer Danny Monterosa. Their combination of indie rock, reggae, and a mixture of music from around the world burst through the stage. The band’s core members, consisting of Martinez, Gonzalez, and Morosin, have been together for three years, with bassist Hugo Noyola filling for their usual bassist. Their main influences are Bob Marley and Peter Tosh, but they easily incorporate music from Africa and the Middle East into their songs. Martinez and Morosin initially met six years ago and jammed at coffee houses for a while before adding Gonzalez to the band. For more information check out their website on <a href=”http://alarmaband.com/” rel=”nofollow”>alarmaband.com/</a> and their Facebook page at <a href=”https://www.facebook.com/AlarmaMusic/app_2405167945″ rel=”nofollow”>www.facebook.com/AlarmaMusic/app_2405167945</a>.