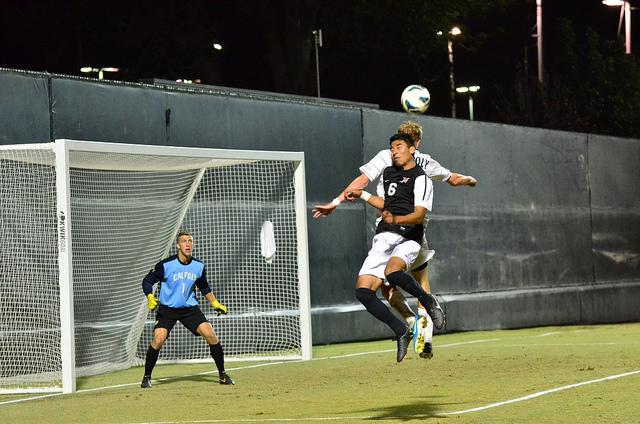 The Matadors’ held off the Nebraska Omaha Mavericks (3-2-1) to a scoreless draw in double overtime despite playing with 10 men in the final minutes of the match at Titan Stadium in Fullerton.

Senior forward Edwin Rivas was shown a red card in the 70th minute, but the Matadors played the Mavericks to a tough stalemate Friday night.

The thriller saw both teams combine for 21 shots in the match, with the Matadors having a total of 14 shots and 5 on target. The Matadors were practically never tested at goal with junior goalkeeper Adam Hobbs recording zero saves.

The Matadors were dominant in the first half and had kept the Mavericks at bay without a recorded shot or corner kick.

Sophomore defender Patrick Hickman gave the Matadors the first early chance in the 18th minute with a shot from inside the box. Senior midfielder Yarden Azulay would open up another chance for the Matadors just before halftime with a shot 10 yards out.

Later, sophomore midfielder Nicolas Camacho would immediately put pressure on the Mavericks two minutes into halftime with a shot on goal. Junior midfielder Marino Peixoto would test his luck at goal a few minutes later but had his chance foiled once again.

Rivas’s red card reduced the Matadors to 10 men and gave Omaha the momentum they needed from the start of the game. However, their increased pressure and offensive play wasn’t enough to even test Hobbs at goal.

Junior midfielder Carlos Gonzalez nearly nicked in the game-winner in the dying moments of the game, but his header went over the net and the game went into overtime.

A number of Matadors had a chance to be the hero and score the game winner in extra-time, but the game ultimately finished 0-0.

The Matadors will be back at home for their match at 7 p.m. on Thursday against the Bakersfield Roadrunners at Matador Soccer Field.