Horror fans and icons unite at The Eyegore Awards 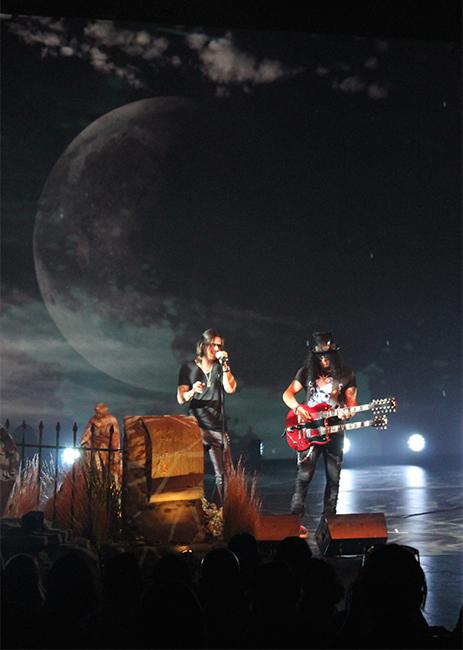 SLASH and Myles Kennedy performed the title song from “Nothing Left to Fear,” the first film he co-produced from his production company, Slasher Films. Photo Credit: Demi Corso/The Sundial

Horror icons and fanatics alike gathered at the entertainment capital of the world to honor industry veterans at the Eyegore Awards at Universal Studios Hollywood on Friday night.

Inside the ceremony, the eerie lighting, loud rock music, and fog machines set the tone for the evening. The decor of tombstones, gargoyles, and metal fences fittingly turned the venue into a graveyard for the night.

“This is amazing, this is such an awesome event,” Westmore said on the red carpet before the show. “You can’t beat Universal Studios, this is the foundation of horror and special effects makeup, so this is the event of the year for me.”

“When I met this loud, hyperactive…very talented young man, the impact he would have on my life, my career, and on the film industry…I wouldn’t be the Rick Baker I know and love if it wasn’t for John Landis,” Baker said to an excited audience.

Emmy Award-winning filmmaker and Special Effects Makeup supervisor, Greg Nicotero was one of the night’s four Eyegore Award recipients. Nicotero currently scares viewers by making zombies “come to life” with his work on “The Walking Dead.”

“What I love is that its our passion, its what we love to do,” Nicotero said as he accepted his award.

Nicotero’s award was presented to him by Chris Hardwick, host of AMC’s “The Talking Dead” and Robert Kirkman, Creator and Executive Producer of “The Walking Dead.” He has also designed makeup effects sequences for over 700 films, including Michael Madsen’s gory ear severing scene in Reservoir Dogs.

“The special effects on this show…when you are there on-set, in-person they are just as terrifying as they are when you’re watching them on TV,” Kirkman said.

The crowd roared with laughter when actor Danny Trejo took the stage and said that he thinks the Eyegore Awards are like a badass version of Oscars. Trejo presented his long-time friend and professional collaborator, Robert Rodriguez with his award.

Rodriguez is the Founder and Chairman of El Rey Network and responsible for making action and horror films such as “Machete,” “Grindhouse,” and “Sin City.”

Rodriguez made the original film “From Dusk Till Dawn” which is now a TV series on the El Rey Network and also a maze at “Horror Nights.”

Slash of “Guns and Roses,” left the audience in awe when he performed and accepted the final Eyegore Award of the night.

He was joined by Myles Kennedy as they performed the title song from “Nothing Left to Fear,” the first film he co-produced from his production company, Slasher Films.

The Grammy Award winner and Hall of Fame recipient composed an original score for the “Clowns 3D Music by SLASH” maze.

For the first time, the first 500 horror fans were able to attend the Eyegore Awards by purchasing add-on tickets when they bought their Horror Nights tickets. Halloween Horror Nights is now open and running through November 2.