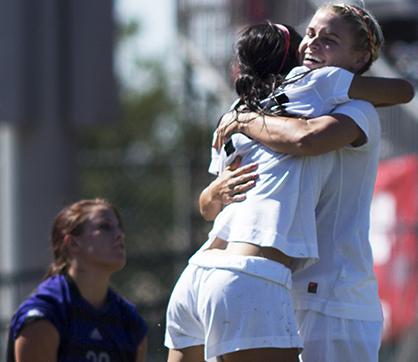 Senior Melissa Lopez (center) and junior Tabatha Dickson embrace after Lopez scores a goal for the Matadors with Dickson on the assist. The Matadors shut-out the Weber State Wildcats, 4-0, finishing their weekend at home on a high note. Photo credit: Trevor Stamp/The Sundial

Cool heads and cooler climates proved favorable for the Matadors (3-5-1) as they shot back from Friday’s loss with a big 4-0 win over Weber State Wildcats (3-6-0) at Matador Soccer Field.

In their second of three games at home, CSUN proved that their a contender this season with four individual goals earned Tabatha Dickson, Melissa Lopez, Leandra Walker and Hannah Wissler.

“I’ve been saying this since day one before we played anybody, we’re pretty good,” said head Coach Keith West post-game. ” I think we have a good shot at this point,”

Sunday’s match saw great pressure on all fronts by the Matadors who came out strong dealing shots from Lyndsey Preston and Cynthia Sanchez within the first 10 minutes. A cross in the 19th minute by Kendal Moskal,  ended in an amazing header and the first goal for the season for Hannah Wissler  .

Continuing the energy the matadors would produce a total of 11 shots before the half and a steady 1-0 lead against the Wildcats.

CSUN came out equally strong in the second half earning another 3 shots on goal in the first 10 minutes of play.

It would only take the Matadors a short time before receiving an opportunity off a foul on their own Kiley Norkus by Weber State’s Shaylee Petersen, resulting in a yellowcard.

CSUN Senior Leandra Walker delivered the penalty with a long low shot from outside the 18 for her second goal of the season.

The goal hungry Matadors didn’t take long to capitalize on their momentum with another first goal of the season for Tabitha Dickson who received the through ball to slam it into the far cage.

To round out the record contest, Senior Melissa Lopez came in for the recovery off a rebounded shot by Dickson to pick up the forth and final goal for the Matadors. It was the first goal of her career.

“Our work rate was phenomenal” said Lopez, “We had the mindset, it’s a new day it’s a new game”

The Matadors return for their last of these three home games against Santa Clara this Friday, September 26, with kickoff at 7 p.m.