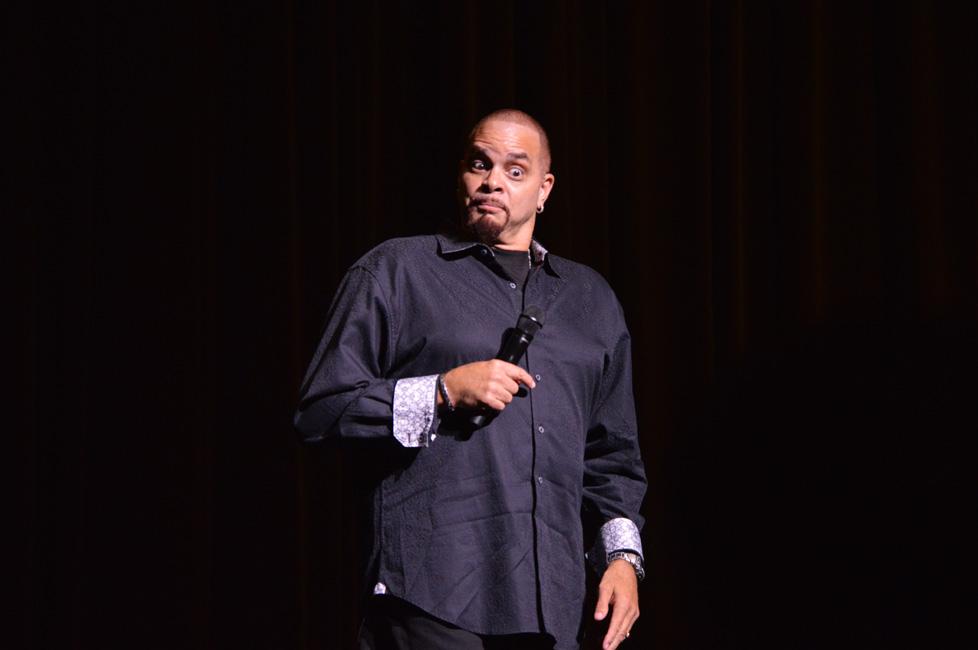 Sinbad, legendary comedian and actor, had the audience laughing during his performance Thursday night at the VPAC. Taking advantage of the university setting, he poked fun at "third year freshman" and "fifth year seniors". Photo Credit: Crystal Lambert/ The Sundial

Last Thursday evening the VPAC was treated to a double feature of comedy stand-up by legendary actor and comedian Sinbad and concert singer Paige Bryan, a former CSUN student and daughter of Sinbad.

The show opened with Bryan, who gave an upbeat and energetic concert, performing songs from her upcoming album “A Mile In Stilettos.” As a former CSUN student, she expressed her excitement to be back on campus and gave a shout-out to former professors.

Bryan performed for an hour with her band and hosted a dance competition between two audience members. The singer made sure both participants were awarded with a copy of her EP.

Ranked as one of the top 100 stand-up comedians of all time by Comedy Central, Sinbad is a legend both on the stage and on screen. He is known for his appearances in hit films such as “Jingle all the Way”, opposite of Arnold Schwarzenegger, “Good Burger”, and his debut film, “Necessary Roughness.”

Sinbad lives by the mantra “funny is funny” and says a good act doesn’t have to be dirty. He is known for telling stories and throwing a comedic twist onto day-to-day life.

His performance at the VPAC lived up to his reputation. Keeping to his clean standards, he was able to keep the entire theatre laughing while avoiding vulgarity.

Sinbad has a strong love for audience interaction, calling on them to participate in his stories and answer questions.

Throughout his performance, Sinbad took the opportunity to poke fun at “third year freshman” and “fifth year seniors.” He continued with the university theme by questioning audience members’ choice in majors. He asked one student, a political science major, if he wanted to be president. The student had answered that a mayor will do. “Oh! So you want to be good, just not great,” joked Sinbad. “Only the best at CSUN.”

Sinbad clearly enjoyed performing at the VPAC and continued to answer audience relationship questions and gave parental advice an hour longer than scheduled.