Student Voices: Do emoticons influence the way we communicate? 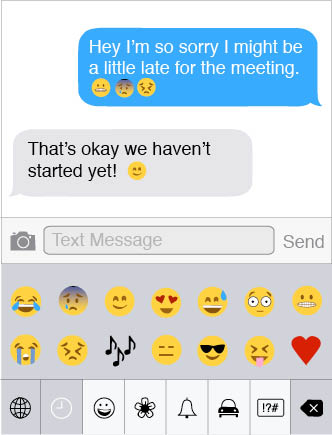 As texting continues to play a large role in our daily communication, we have found ways to emulate face-to-face or voice conversations through typing a message. Emoticons, more commonly known as emojis, are just one way to do this effectively.

They have the potential to punctuate a word, a thought or a feeling in a way that is understood on a more sensory level. These emoticons can range from basic smiley faces to icons of animals and objects. Studies from Rensselaer Polytechnic Institute and the Open University of Israel show that emoticons help us convey mood and tone in text messages.

It was ultimately determined that emoticons are commonly used to substitute the nonverbal cues that we use in face-to-face communication. They give the participants an idea of how the message should be understood by conveying the mood, attitude or emotion of the writer. By adding an emoticon to a message, the readers received the tone of the text as either more positive or negative with the image than those who read the same message without emoticons.

“Emoticons are more conductive to tell someone my tone in texting,” said senior English student Kaitlin Pollard. “I can better communicate my mood that way.”

There is an emoticon for almost every emotion imaginable and with these possibilities it is no surprise that people react to emoticons the same way they react to a human face as discovered by Dr. Owen Churches of the School of Psychology at Flinders University Australia.

Although emoticons help convey emotion they can also be a great medium for entertainment because of their familiar and sometimes endearing human qualities.

“I use them to either get my point across or get people to laugh,” said Chandler Berke, sophomore and communications major, Chandler Berke. “I also like getting them for that reason. You could have entire conversations with just ‘emojis.’”

A common use for emoticons is to prevent misunderstandings. Unlike face-to-face interactions, texting doesn’t give you the ability to use tone of voice or facial movements to communicate a message. It would equate to speaking to someone with no change in facial movement or vocal inflection. Sarcasm and jokes can easily be misinterpreted in text format.

“When you’re texting, it’s hard to show what you really mean and emoticons help you get the message across,” said Kristen Jones, sophomore, political science major.

By incorporating these icons into their messages, emoticon users have greater freedom to
express themselves. For those who do not use emoticons regularly, they can also be a useful tool especially when interpreting messages.

The growing market for emoji-only messaging such as Emojicate and Yo!, indicates that they will continue to give us more than one way to express ourselves and tell our stories.