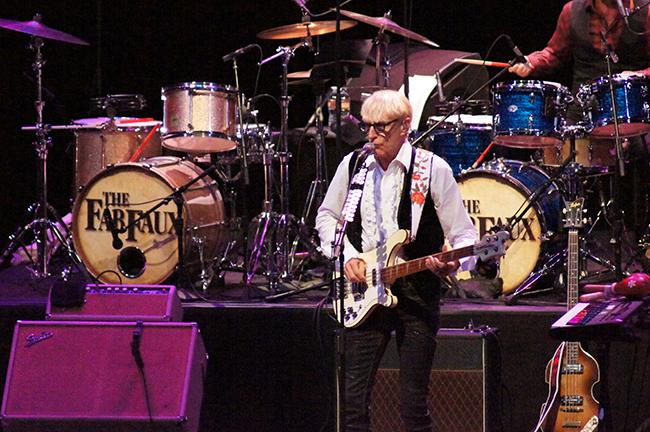 Picture this: Four men donned in Beatles-style costumes and wigs, terrible British accents and lip-syncing. The Fab Faux is nothing like that. Instead, their goal is to show the Beatles catalog with as much respect and justice as possible.And they succeeded in doing so Saturday night at the Valley Performing Arts Center.

During their nearly sold-out performance, the Fab Faux put on a production that would make any Beatles fan feel proud and nostalgic.

The Fab Faux came together in 1998 after a discussion between bassist Will Lee, who has played with each of the Beatles, and guitarist Jimmy Vivino. Lee and Vivino knew they wanted to create a Beatles tribute band that focuses on sounding as close as sonically possible to the original recordings.

Each member adds impressive vocal and instrumental talents that combine to make up a high quality performance, while bringing in strings and horn sections from time to time to take their sound to another level.

They even managed to duplicate the more intricate sounds the Beatles incorporated into some of their songs. The first half of their set was a mix of a Beatles songs like “I Am the Walrus” and “Strawberry Fields.”

While both songs are very complicated to duplicate with the intricate overlapping of instruments and demanding vocals, the Fab Faux was able to pull it off impressively.

Almost every song ended with standing ovations from enchanted audience members, especially when the band introduced special guest Dhani Harrison son of the Beatles’ George Harrison, to the stage to help them perform “Savoy Truffle,” a song written by the late Beatle.

Dhani Harrison was a pleasant surprise for the crowd, as he is not only the spitting-image of his father, but just as talented.

The Fab Faux went through the Beatles’ entire “Abbey Road” album during the second half of their performance. Lee, who had been giving a tremendous amount of energy throughout the entire show, could barely contain himself during their performance of “I Want You (She’s So Heavy).”

He ran through the crowd during the last four minutes of the almost eight-minute-long song, while continuing to play his ear-pleasing bass riffs. For the encore, the band came back to perform two more of the Beatles’ older songs, giving the crowd something more to roar about.

For the last 10 minutes of the show, the Fab Faux had turned the VPAC into a dance party. In that moment, audience members — old and young — came together to celebrate the Beatles and their everlasting musical legacy.

The band has successfully accomplished their goal of performing Beatles music, or what they called their “form of classical music,” shattering the stereotypes of what cover bands are like, and putting on a show worth seeing more than once.

Any Beatles fan is sure to not only revel in the band’s work, but will most likely find themselves talking about this special experience for years to come.