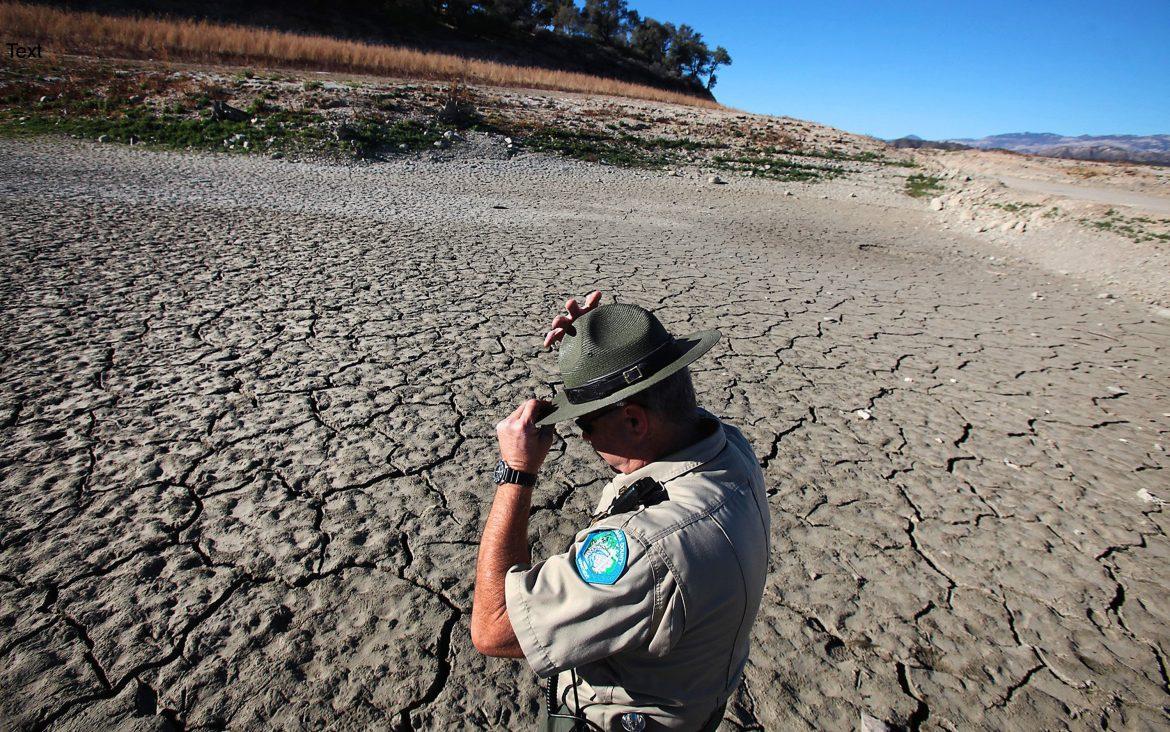 A park ranger stands amidst a dry bay at Lake Cachuma in January 2014. This area was filled with water in 2013. / Courtesy of MTC.

This world is going to hell. Each generation’s elders, aged to perfection, have claimed this as their swan song, presumably since the dawn of time — each believing their predecessors have defiled what they so diligently created.

But for this generation, our generation, it’s tough to pass the buck. Baby boomers not only saw man visit the moon in 1969. They also came to the realization that natural resource shortages, like the 1973 oil crisis, are a reason enough to decry modern crusades on foreign land.

Our generation grew up with science fiction suggesting the idea that by now we should have flying cars, hoverboards, robot maids and talking dogs, either the entire world at our fingertips or struggling to survive in a post-apocalyptic wasteland. Simply put, with all of the technology our species has created, why are we struggling to conserve the most abundant resource on earth? Water.

I’d like to think this isn’t a drought, it’s a crossroad. We’re sitting in one of the worst droughts on record and it’s inevitably going to get much, much worse. Why, you ask? Well much like credit card companies feasting on college students’ toxic spending habits, we too ignore our withering water supply hoping the problem will fix itself.

The UCLA water main break could have happened to any city, at any time, however, what is expected to happen to pipes that haven’t been serviced for nearly a century? The first step to keeping things running smoothly whether it be a car, toaster or a major water main, is preventive maintenance.

This is a major task the city should not have overlooked. Instead Westwood and the majority of the UCLA campus was treated with a pop-up 8 million gallon bath.

The next idea is absolutely absurd to say the least. I understand fads will come and go, but the social media attention that Slide the City has recently received is astonishing. Young adults on social media are thrilled at the prospect of this marketing ploy than stressing urgency of this drought. It’s the arrogance of it all that gets my goat.

Massive water slides nearly seven city blocks long surrounded by common street fair entertainment– sounds like a daydream I’d envisioned when I was in grade school. In fact, Slide the City anticipates organizing four of these events in San Francisco, San Jose, Los Angeles and Orange County in the month of December alone.

Really shows just how hip some social media users can be regarding local issues and how negligent some events can be. Yes, everyone would love to slide three blocks through Downtown LA. If you say you wouldn’t, you’re a liar (I just don’t do crowds anymore). Yet, this is a gross misappropriation of a much needed resource that could prove even scarcer should El Niño weather patterns not bring as much precipitation as expected.

Celebrities have begun to chime in on this calamity in waiting. Comedic legend Conan O’Brian and pop icon Lady Gaga, have joined the Save Our Water movement by featuring in Public Service Announcements urging Californians to watch their water consumption and conserve when possible.

Now, what can we do about this looming disaster in the meantime? Well we could dodge the issue. We can blame poor planning, bad luck or let future Californians worry about it when it all runs dry. But we’re different, aren’t we? We children of the internet age understand poor decisions float around the vast ends of the internet, reminding us of our flawed logic or poor decisions. Even if we can’t solve the problem, because we haven’t found Captain Planet yet, we can at least eliminate our contribution to the problem. So how can we pitch in?

If you enjoy detailing your car or just want your car to look fresh before every night out, at least go to a car washing facility that retains excess water. Those miniature rivers flowing from your driveway are fuel to this fire. Plus let’s face it, that guy in the Lamborghini is always going to win that battle.

Everyone loves a good soak in the tub or shower but get real. Get in and get out.  Bath tubs hold roughly 7.5 gallons of water per square foot and average designs range from 40-80 gallons per fill. Whether you’re using up all the hot water in your building, holding up a roommate’s morning routine or simply just hogging the bathroom, it’s time to address the environmental distress instead of ignoring it. This result could also be achieved by installing high efficiency showerheads in each bathroom without cutting shower time if you want to be a dick about it.

3. If It’s Yellow Let it Mellow, Brown Flush it Down

I’ve met this classic water conservation technique with ravage resistance from every women in my life I’ve shared a loo with, regardless if the seat was up or down. Before the Energy Policy Act of 1992 passed, toilets in America would use as much as 3.4 gallons of water per flush. After this implementation in 1994, that figure was reduced to 1.6 gallons per flush and ushered in the age of high efficiency crappers. Even today on campus we can see efforts to reduce flow more and more.

4. Redesign Your Yard (if you have one)

It’s the classic neighbor who rate everyone by their lawn: They turn off the sprinkler system during the day and water their dried up patches of St. Agustine or Kentucky bluegrass at night by garden hose. They usually emerge under the cover of darkness to avoid any stares of disapproval by fellow neighborhood association members. Although this lawn watering technique does help avoid excessive water evaporation, it leaves lawns completely saturated overnight risking mold infestations. They’d be on the right track if only they could get up and do this at 5 a.m., but that’s a lot of commitment. Xeriscaping is a great way to drastically cut or abandon consumption altogether. By utilizing low consumption designs and plants you can have a low maintenance and intelligently indigenous plot to enjoy.

It’s time to be held accountable for our usage. While we aren’t going to solve this problem overnight, we can make efforts to reduce this concern. We’ve grown up with access to modern technologies to be more responsible and more sustainable, so let’s act on it! The old timers are right about one thing though: if you watch the kettle, it never boils.