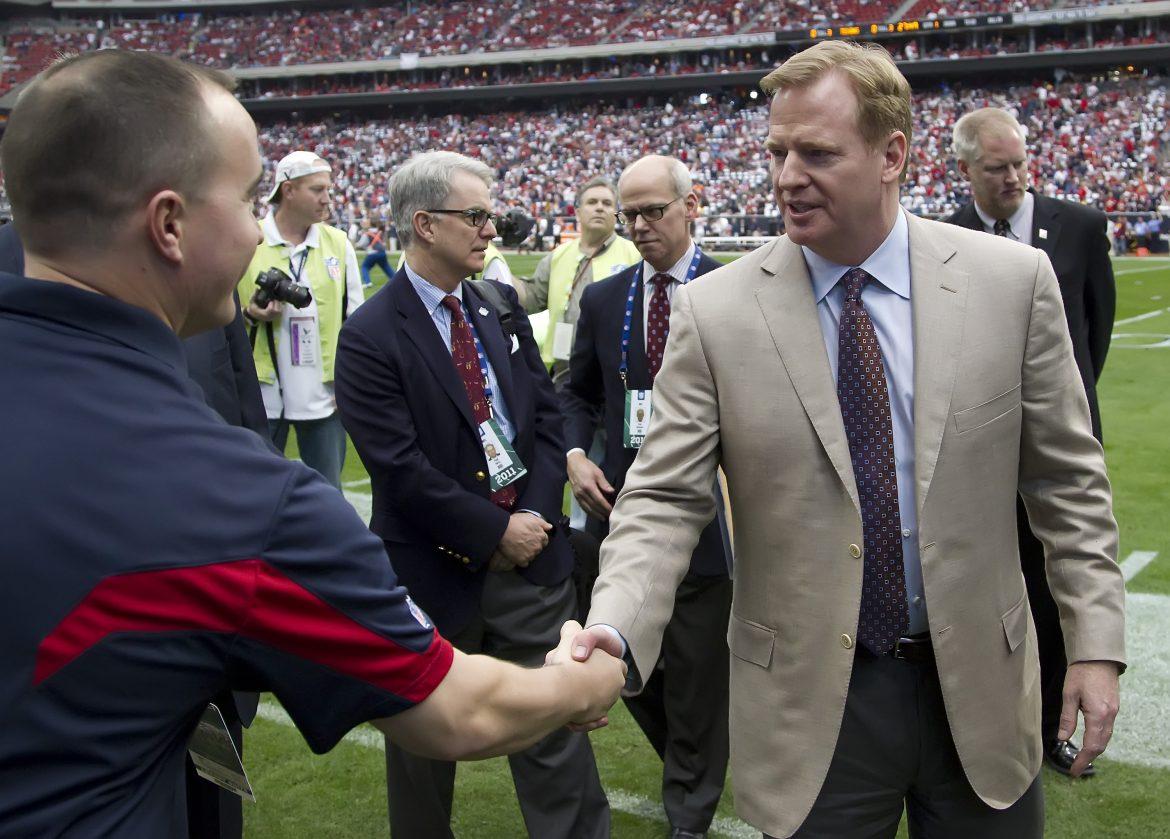 NFL Commissioner Roger Goodell has received much criticism for his handling of NFL players' personal conduct, but he should not resign. Photo courtesy of MCT.

$44.2 million is what NFL Commissioner Roger Goodell reportedly earned in the 2013 fiscal year. What is certainly a large amount for a person who does not even play a down of football, Goodell has been earning his salary with the amount of headlines the NFL has captured recently.

In an effort to diffuse the situation, Goodell addressed the media on Friday, Sept. 19. Goodell did not announce a lifetime ban on himself from the NFL like many people would have would liked, but he did show accountability and remorse.

He did field many excellent questions from the national media but Goodell did not provide the sort of insights and answers people wanted. Goodell did juke and stiff arm around many of the questions by deferring to the legal process and admitting that he and the NFL’s policies failed to handle many of the situations properly.

Comparisons were made between Goodell’s press conference and NBA Commissioner Adam Silver’s conference banning Donald Sterling. However, the contexts are completely different for the unrelated situations.

Newly elected Silver was applauded for dealing with a Sterling parasite that left multiple scars on the NBA. While the frustration towards Goodell from fans, players, and the media has been brewing for years due to his history disciplining players.

What Goodell did accomplish in the conference was illustrating an example. He admitted the NFL needs to rework their policies because they dropped the ball on the Rice decision, among others things.

There is no doubt Goodell has been inconsistent with the outcomes of discipline for players. Before the recent change in the Substance Abuse Policy, an athlete could be suspended for a season due to a series of failed drug test, while a player like Ray Rice received a meager two game initial suspension despite video evidence of domestic abuse.

However, Goodell has consistently maintained he would judge player misconduct on a case by case basis.

Leaving a players’ livelihood up to one person seems like a huge judgement, and too much power for Goodell, a flawed human like us all. However the union and owners agreed to give him that power. Sure, Goodell has been wrong when disciplining players who violate the NFL’s Personal Conduct Policy, but what about the times he has been right?

Chicago Bears wide receiver Brandon Marshall had at least eight documented incidents of domestic abuse since being drafted in 2006. Rather than bringing the hammer down on a troubled Marshall, the Bears wide receiver got the help he needed and has become an example of turning the corner as well as a vessel for awareness about mental health in athletes.

Michael Vick left arguably the biggest public relations nightmare for the NFL with a conviction for organizing a dog fighting ring. Vick’s return to the NFL combined with efforts in the community and for the humane society show an example of rehabilitation and fighting through adversity that we all can learn from.

In those examples, maybe Goodell saw Vick and Marshall as people rather than guilty celebrities. Maybe he saw them as men who made mistakes, despite their roles as public figures. Maybe that same humility is what he saw in Ray Rice to give him such a short initial suspension.

Granted, Goodell does not deserve any sympathy. It is no coincidence the NFL’s updating of the Substance Abuse Policy and insert of a Domestic Abuse Policy have operated as public relations effort to rewrite wrongs. Coming after all the outrage,  those moves may have been a little too late but is that all Goodell’s fault?

Either way,  public opinion should atleast give Goodell the same type of  humility he has given many of the players. Yes he has too much unilateral power. Yes the NFL needs better policies with checks and balances for player discipline, but that takes agreement between his bosses (the 32 NFL owners) and the players union.

Even if Goodell is compensated enough to shoulder the weight of the NFL, that does not mean he should. His handling of the recent situations did leave a black eye on the NFL, and his remorse does not excuse that fact.

Yet he said it many times Friday, the handling has been a mistake that he and the NFL can not repeat. Moreover, they will learn from it moving forward.

That is the same message Goodell has preached to troubled athletes, and now he will have to take his own advice.

Give Goodell a chance to deal with this public relations nightmare, because resigning as Commissioner will not solve any of the players’ problems with misconduct nor will it correct the broken NFL policies of discipline and players’ conduct.