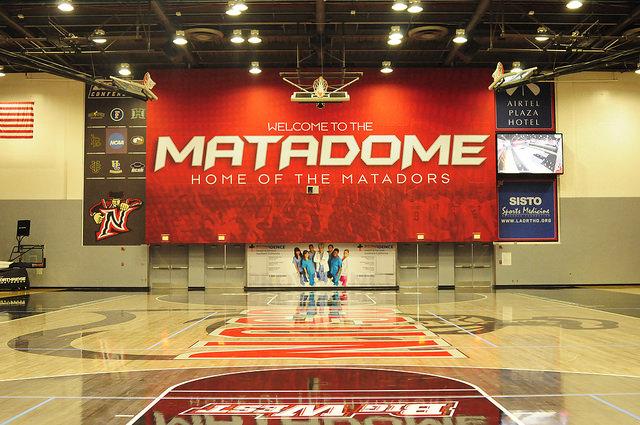 Through the first half of the season, the Matadors will rely on experience to defend a new Matadome floor, and they will take their games on the road against tough non-conference opponents. File Photo/ The Sundial

CSUN’s complete overhaul of the Matador logo, athletics uniforms, the Matadome and the perimeters surrounding the athletic fields took steps towards Director of Intercollegiate Athletics Brandon Martin’s vision for the entire athletic department.

“We want to be put in the same token as USC and UCLA,” Martin said. “Our goal is to become an elite collegiate program.”

The introduction to the rebranding took place earlier this summer in June. Since then, there have been several changes that have taken place on campus and in particular, the Matadome.

Aside from the logo, there are plans to upgrade the trophy case inside the Matadome as well as the hall of fame placards.

“We want our athletes, current and old, to feel a sense of pride when they walk through these areas,” said Martin.

The floor scheme inside the Matadome has changed as well. It now features the new Matador logo as well as new color patterns. As of today, the Matadome is the only court in the country that features a blacktop theme colored asphalt grey.

The department is also currently in the process of renovating the women’s basketball locker room. It will feature new graphics, furniture, video equipment and wider lockers.

Graphics will also be added in the weight room and Matador Pool, where the women’s water polo team practices and plays. Water polo will be getting new graphics along the hallway that leads to the entrance as well as new images along the walls inside Matador Pool featuring historical accomplishments.

The rebranding program is expected to pay dividends beyond the scoreboard. Martin is pushing towards getting the surrounding cities in the San Fernando Valley to be more aware of CSUN Athletics by promoting events in both English and Spanish.

The athletics department is using the #MatadoresAscendiendo to establish a direct channel via social media to the Spanish-speaking community at CSUN.

Season schedules for the athletics department will also be promoted through pole banners along CSUN. The schedules are expected to be updated based on the sports that are in-season. These changes are not expected to affect the budget, as the funds to cover the upgrades have all been raised by private gifts.

The purpose of this push is to communicate a message throughout the entire campus and around the community. A message that embodies feelings of courage, determination and confidence, said Martin.

“We want our fans, students, and stakeholders to know that our logo is more than just a brand or a new look. It’s about an expectation, memories, pride and the excitement that we all have in being Matadors,” Martin said.

Merchandise sales have reflected those sentiments from Martin. Through the first month of the fall semester, sales have been strong on both clothing and gift items featuring the new athletics logo, according to Amy Berger, bookstore director.

“I haven’t had many discussions with people regarding the logo, but based on the occasional comments I have heard and early sales, I would say the logo has been well received,” Berger said.

In regards to the new Matador, Vera said it is “okay.”

“It has a more straight-forward approach,” Vera said. “It lacks personality though.”

“It looks refreshing and more modern than the old one,” Arteaga said. “As of right now I only own a shirt. I might buy more stuff over the next year or so.”

The bookstore and athletic department are currently working on launching an event to promote the new Matador logo.

Details have yet to be finalized, but it is expected to be held some time in October and will feature games, prizes, giveaways and samples of items available in the bookstore featuring the new logo.

As for the university, Jeff Noblitt, associate vice president of marketing and communications for CSUN, said the athletic department has created excitement across the university environment.

“We expect the rebranding to enhance and increase CSUNs reputation beyond Los Angeles,” Noblitt said.

He said the rebranding should increase the philanthropic efforts of the university as people become aware of the CSUN academic program, which should mean more donor support and scholarships for students.

“(The rebranding)  will elevate the value of a CSUN degree,” Noblitt said. “Students, alumni, and employers will know the strength of our academic program.”