Batman v. Superman, who will win? 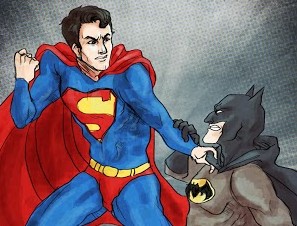 Why Superman would win, by Jon Diaz

Look! Up in the sky! It’s a bird. It’s a plane. It’s Superman! Even if you’ve never seen the original Superman series from the 50s, you’ve undoubtedly heard that phrase used or parodied. For the next few minutes I will argue that this iconic hero will win in a showdown with another classic DC Comics hero, Batman, but first, numerous factors need to be considered.

First and foremost, are weapons or technology a factor? I think just about anyone will agree if this is a battle of shear strength, Superman wins. With just a few punches he can incapacitate Batman, even if he’s wearing armor. Batman, while he has worked for years to train his body, simply cannot withstand the barrage of punishment from the last Son of Krypton.

If weapons are used, which Batman swore he would never use, then Superman would still have the upper hand. Batman is seen as master inventor, but what many people forget in addition to super strength and speed, Superman has genius level intellect. Basically, anything Batman can imagine or create Superman can do too, and in probably half the time.

Also let’s not forget the fact that Superman has had adventures across the galaxy, unlike the Dark Knight, who usually stays in Gotham City. Along the way Kal-El has brought back weapons, technology and creatures and kept them safe in his Fortress of Solitude. He could presumably use an alien weapon against Batman and end the fight right there.

Speaking of alien, one factor that gets brought up frequently in any battle with Superman is his weakness against kryptonite, the radioactive pieces of Superman’s homeworld. For the sake of argument, let’s assume there is only one kind of kryptonite (there are actually different kinds with varying effects)

First of all, his vulnerability to kryptonite has varied greatly in all media. In “Kingdom Come,” Superman was virtually immune to kryptonite. In the “Man of Steel” miniseries, Superman battles a cyborg named Metallo, who is powered by a large chunk of kryptonite. Just being in the presence of kryptonite weakens Superman, but as he usually does, he manages to subdue Metallo. And that’s where the genius level intellect plays a part again. Even though he is outmatched and weak, Supes still finds ways to outsmart his villains.

Superman gains his powers from Earth’s sun, so inevitably the question becomes, “What if the sun was blocked? Would Superman still have his powers?” The answer is typically, “Yes, for a while.” Superman’s body acts like a battery in that it allows him to store energy. Once his energy has run out and he can no longer gain energy from the sun, he would presumably be weakened, but that could take a while.

Those that think Batman would win, often cite the “Dark Knight” movies or popular “Arkham” games as proof. Batman is stealth and cunning. He could get the drop on Superman and end the fight. People typically forget Superman has X-ray vision in addition to super sensitive hearing. Superman has trained his senses to zero in on one particular thing, just like in the awesome “Man of Steel” movie. He could punch through a wall all before Batman has time to react.

The last thing to consider in this battle is public favor. This may not seem like a big deal but it can make a huge difference. Superman stands for truth, justice and the American way while Batman is a dark, brooding vigilante. I wonder who the U.S. government is going to help win. Superman is seen as a champion of the people, while Batman is basically a billionaire with too much time on his hands.

Even though he was created more than 75 years ago, Superman is the epitome of a superhero. Joe Shuster and Jerry Siegel drew from the biblical epic of Moses and the stories of Hercules to create the most recognizable comic book character in the world. He is the embodiment of the American dream even more so when you consider he is not from the U.S. and not even from this planet.

In conclusion, the only way Batman would win in a fight is if he blocked out the sun, had a good amount of kryptonite, used weapons, and if the battle took place far from American intervention. Let’s wait and see how director Zack Snyder makes this happen on the big screen. Until next time, up, up and away!

Why Batman would win, by Ryan Mancini

Not all heroes can be perfect. Some can be cruel, living by their own rules and bring order to chaos. The DC comics character Batman, fresh from the 75th anniversary of his creation by the pen of Bob Kane, is unquestionably the most popular and beloved hero, who lives particularly by his own morals and laws.

The past few years have been very good to the Dark Knight, with several installments in the “Arkham” video game series, and the final game set to release next year; a critically and financially successful film trilogy directed by Christopher Nolan, a master of his craft; and now the newest and greatest bit of news of Batman returning to the big screen alongside his DC comrade Superman.

While the casting of Ben Affleck has been lauded (ooh, the guy from “Argo”) and chastised (ugh, the guy from “Daredevil”), there is a feverish excitement for the prospect of a film featuring the “watchful protector” versus Superman, or “not Nicolas Cage,” in a showdown prior to a Justice League film, to be released by Warner Bros.

The Batman persona has attracted moviegoers, comic book readers, fanboys, directors and misfits across the years. His “anonymity” among the citizens of Gotham, his ability to become fear and his rogue’s gallery all define the Caped Crusader’s war against crime. He fights crime within the shadows with no want of fame and notability, resulting in infamy and notoriety.

Batman serves as the ultimate “badass” superhero, compared to Superman’s “boy scout from another planet” status. Superman defined the term superhero, appropriately for being the first, but Batman, as the second, was so radically different from Superman that it brought much more attention and even greater attraction.

By being second, Batman became No. 1.

Batman is unafraid. He will break the rules to find criminals. He stops one step behind ending a life. After “Man of Steel,” we now know Superman (on film) will kill if necessary. For now, none of the past incarnations of Batman in film have (directly) killed someone. This way, the Dark Knight’s righteousness remains firm.

Superman was the cheerful, fatherly and dynamic guardian who arrested robbers and saved cats in trees. Batman was, and thankfully still is, a night prowler. He makes exceptional use of advanced gadgetry and terrific skills of deduction, and his abilities as a fighter make him a formidable opponent.

As a kid, Batman was the first superhero I was introduced to, primarily because I was born during the making of the Burton/Schumacher series, as well as the animated series. While the weirder villains were something new to me (Clayface, Mr. Freeze, etc.), Wayne’s resolve was strong.

When up against the god-like Superman, it has been proven already that Batman could win in a battle thanks to Frank Miller’s “The Dark Knight Returns.” Superman has his own set of morals that hold him back from being a vengeful exterminator of all life; Batman will never kill, yet he can fight dirty.

Batman makes use of his intellect and deduction to plan anyone’s defeat, Superman included. Between the two, Batman is brain and Superman is brawn. And in a fight where Batman can map out the results, he ultimately wins.

Superman acts as a benevolent god. He becomes frightened by the empowered defiance of a mortal man that he considers a friend. That reaction can be, and has been portrayed as, his downfall.

In Miller’s comic, Batman does prepare himself when he duels with Superman wearing an armored suit, helmet and synthesized kryptonite included. I think in any other scenario, Batman would similarly prepare himself if Superman went rogue or needed to be apprehended.

Batman also has at his disposal the presence of authority in Gotham. Superman’s arrival into Gotham would be analogous to a violation. Batman going to Metropolis brings more of an “ooh, aah, wow, another superhero” moment.

Superman’s quality of holding back is a fatal choice, giving Batman what he needs to win a fight with him. He will make sure Superman remembers “the one man who beat [him].”

Thus, the “Batman breather” has ended. It is Batman’s arrival to Metropolis that people are now itching to see. The battle between the two gods will likely not result in a slaughter, given Warner’s plan of having a DC Cinematic Universe.

With its more powerful and freshly observed legacy, the Batman character has persisted and survived. The next decade will, arguably, be kind to the Dark Knight.