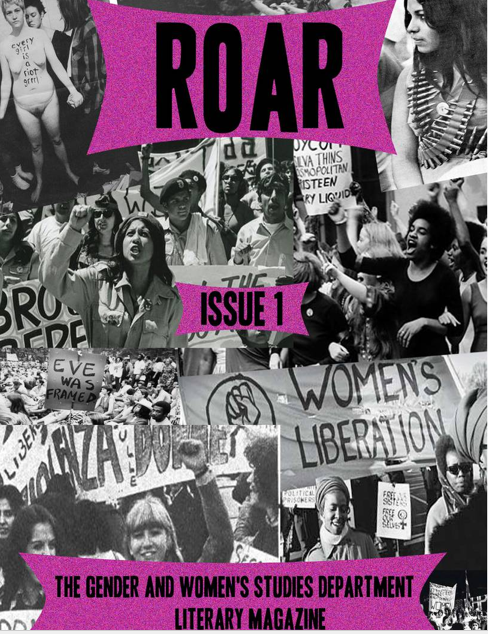 The student run Sundial newspaper and Scene magazine are no longer the only publications making their mark at CSUN.  This year the Women’s Research and Resource Center in the Department of Gender and Women’s Studies will be producing ROAR.

ROAR is a literary publication created by students for students. It will be published each fall semester and fronted by editor Joey Reynoso, a Gender Women’s studies (GWS) major who is enrolled in the GWS community service course.

Although the project is still underway, staff has included pieces of poetry, prose, essays and visual art.

“Some ideas that I’m toying with are intersectionality and feminism, the future of feminism and radical self love,” said Reynoso. “I want it to be self-reflective of individual experiences, inspiring and empowering and also responding to dominant culture.”

Though the magazine is a literary publication, it specifically targets the CSUN community, including faculty. But ROAR is not limited to women.  Reynoso has plans to distribute ROAR at festivals such as the LA Zine Fest, San Francisco’s City of Lights bookstore and other events like Riot Girl shows and queer punk events and any other cities he feels it would appeal to.

“Our audience is for anyone interested in issues such as gender, race, class, sexuality, nationality and ability,” said Shira Brown, professor and director of the Women’s Resource Center.  “And more specifically, anyone interested in the places where these identities intersect.”

What makes ROAR unique is that it is completely funded by the Women’s Research and Resource Center on campus and does not require any advertisements.

“A lot of people have shown interest in ROAR which then turns their attention to the center,” said Brown.

Skylar Grogan, a recent GWS graduate and former editor-in-chief of ROAR magazine explains her motives for bringing back the magazine.

“My friends in the F Word, the feminist club on campus, and I were discussing how we wanted to create a zine, something creative for us to have our voices heard,” she said. “I wanted to restart it because I wanted feminists on campus to have a creative outlet.”

ROAR is a black and white publication thus far, but there is interest to include a digital or online version, which would be in color. Anyone is eligible to contribute to the publication regardless of their major explained Brown.

The highly personal perspective pushed forward through this literary magazine provides an intimate outlook into the experiences of women.