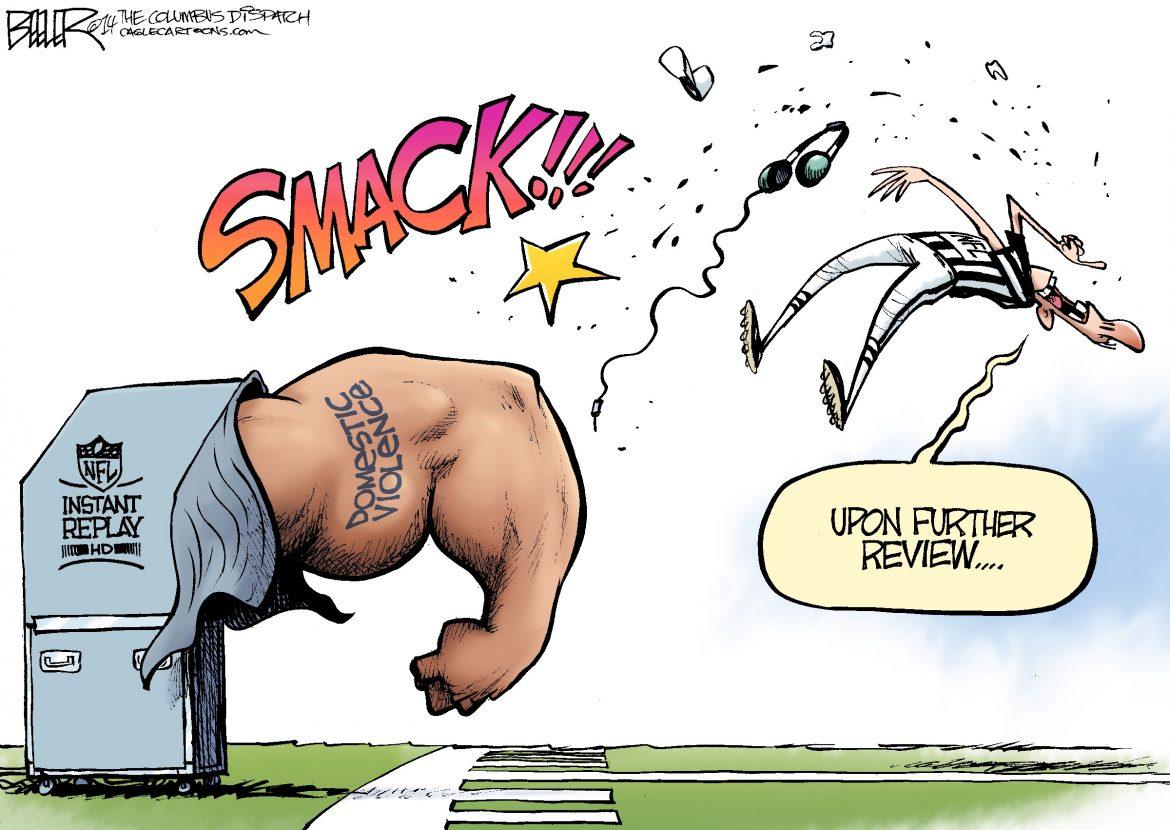 The NFL should have done more against players' violent misconduct due to the violent nature of football. Photo illustration courtesy of MCT.

The NFL should have done more against players’ violent misconduct due to the violent nature of football. Photo illustration courtesy of MCT.

Junior varsity football is an eye-opening experience. It starts the during the fading weeks of the summer  as a one or two week training camp premised on the purported character building qualities of violence and depravity.

In it you learn the 5 or 10-year-old pads assigned to you protect against little more than sudden death. You weigh the potential of future sterility against grueling discomfort of a bargain bin cup and jockstrap.  You wonder whether the adults you been have entrusted to may themselves require supervision, as they encourage violent hits.

The first few practices are the worst. You are plagued by a never ending migraine that you are constantly assured will pass in good time.

They tell you to think of it as breaking in a new glove. Except, it is your brain and your body.

You are introduced to coaches who speak of harming your fellow man with the wide-eyed passion of an evangelist.

You learn to take every opportunity, may it be during or after play, to break the will of your opponent.

You learn that, upon an interception, anything short of murder becomes permissible against opposing signal callers and thus you should adjust your behavior accordingly.

As training camps goes on, many who have looked the part, talked the part and acted the part begin to fall off. The teams get smaller and smaller.

Most of all, you learn that football is the great leveler of men. It does not matter whether you are born high or low, rich or poor, tall or short, skinny or fat, or even righteous or depraved, you stand little chance in the sport without a sort of functional menace about you.

Football players  come to recognize that the game tickles at something dark in you, and that firewall needs to exist between the personas you inhabit on and off the field. It is footballs’ unwritten golden-rule, keep the gladiator mentality on the field.

Ray Rice is among players placing the NFL in the spotlight due to violent misconduct off of the field. Photo courtesy of MCT.

Easy enough for a kid in high school, but how much more of you is consumed by it when your identity, livelihood and standing are all tied to the game?

NFL players are socialized and defined by this violent culture they have grown up with since Friday night high school games and Saturday morning pop-warner games.

Once a player breaks through as a professional, is it credible to assume that all the aggression flaunted on Sundays can be bottled by Monday?

Not all of it, and not from everyone. The recent NFL controversies about players’ conduct exhibit the violent mentality leaving the football field.

If the game in any way contributes to incidents of domestic violence by players, does not the NFL have a responsibility to take action?

Evidenced by the leniency shown to offenders in the past, the league says no.

Within a fortnight in 2001, Arizona Cardinal running back Michael Pittman was twice arrested for domestic violence. He was suspended one game. Three years later Pittman pleaded guilty to a felony charge of endangerment after purportedly ramming his SUV into a car carrying his wife, 2-year-old son and the family babysitter. The NFL gave him a three game suspension.

In 2007, Tampa Bay Buccaneers running back Lionel Gates reportedly punched a pregnant women. Similar to Ray Rice, he avoided conviction by enrolling in a pretrial diversion program. He received no league punishment. There was no league sanction.

In 2013 Indianapolis Colts linebacker Erik Walden received a one game suspension for head-butting Tennessee Titans tight end Delanie Walker. The year prior, he pleaded no contest to a misdemeanor charge of disorderly conduct-domestic.  The league did not suspend him.

If the league office viewed domestic violence as seriously as it said it does and did, the NFL would have gone after it pro-actively like it went after concussions.  The NFL would have branded it as a similar existential threat to the league. It would have punished it with the severity that has made relics out of bounties and head-hunting.

Instead, what the NFL did was nothing.