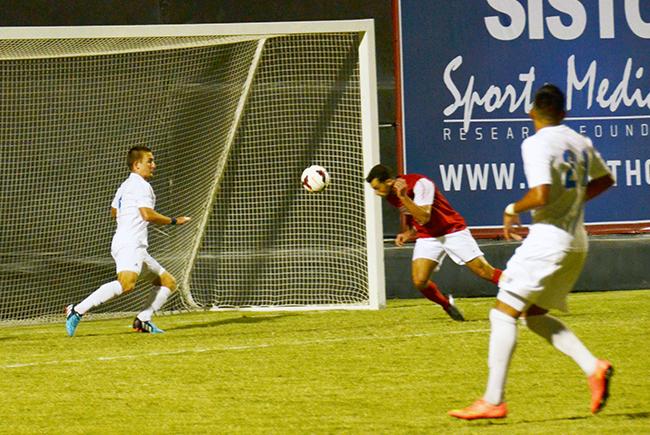 Senior forward Sagi Lev-Ari heads the ball towards goal only to have a CSU Bakersfield defender deny him of scoring. Another CSUB defender would gift the Matadors a penalty kick seconds later. CSUN ultimately scored their penalty kick and won the game 2-1 after double overtime. Photo Credit: Vince Nguyen/ The Sundial

Senior forward Sagi Lev-Ari scored twice to give CSUN (4-3-1)  a tough 2-1 win over the Bakersfield Roadrunners (5-2-1) in double overtime at Matador Soccer Field.

Last season’s All-American forward scored his seventh and eighth goals this season when he opened the scoring in just 38 seconds. Junior forward Carlos Gonzalez picked up a loose ball and sent a through ball toward Lev-Ari. This was his third career goal where he’s scored within the first minute of the game. He’s done it in each of his last two seasons.

The game was tightly knit all around, with both teams battling it out in the midfield and taking shots when given the chance.

Bakersfield tested junior goalkeeper Adam Hobbs in the 36th minute after the Roadrunners picked up the loose ball. Bakersfield made the shot, but Hobbs cooly collected the ball.

The Roadrunners equalized shortly after halftime with a similar play to CSUN’s opening goal. Bakersfield midfielder Edan Mendoza gave teammate forward Simon Doherty a through ball and slotted home passed Hobbs to even the game until the end of regulation time.

Hobbs was put to work in the second half, but had a display of athleticism to save the possible Bakersfield game-winning shot.

His match-saving dive came in the dying moments of the first period of extra-time. The Roadrunners shot was always going to go to the net, but Hobbs made a jump for it with his right arm extended to keep the Matadors in game. Hobbs would register a total of five saves at the end of the match.

The Matadors constantly put pressure on the Roadrunners in the second period of overtime. With five minutes left to play, CSUN threw everything they had at Bakersfield.

A cross from the right nearly led to a goal, and forced the Roadrunners to handle the ball inside the box and give Lev-Ari the chance to notch home the game-winning penalty.

The forward took the spot-kick and converted his fourth game-winning goal of the season – his 38th career goal.

“Yesterday was the start of Rosh Hashanah, the Jewish New Year, so I’m glad to start my year off like that,” said the Matadors’ fourth all-time leading goal scorer. “Last year I scored 16 goals, and I look to improve on it.”

Head coach Terry Davila, who was without senior forward Edwin Rivas for a one game suspension, knew the game would be difficult.

“We knew it was going to be a grind and tried to find our offensive rhythm,” Davila said. “We depended a lot on our team defense and our team defense has been outstanding. We were willing to play the 110 minutes to get the win.”

Coach Davila and his team will rest up for the week and await their game with No. 1 UCLA on Sunday at Drake Stadium.