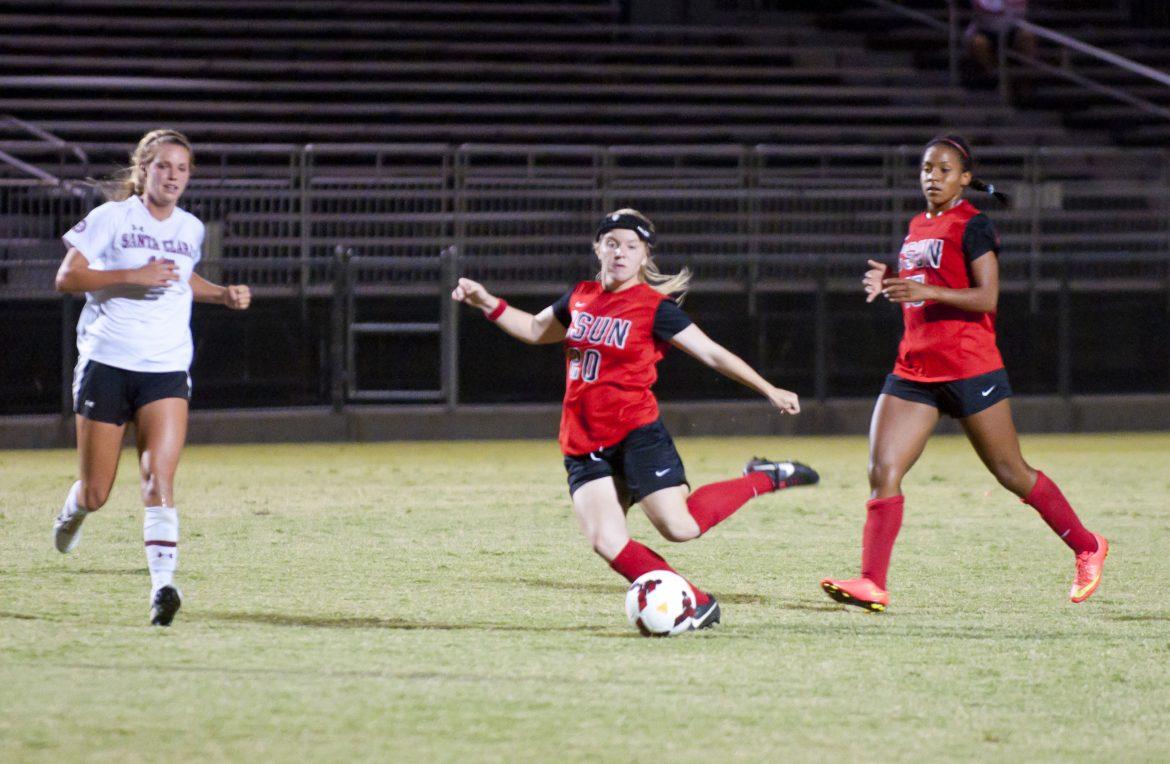 Matadors Kourtney Kutscher, center, tries to score as the Broncos midfielder Dani Weatherholt, left, races to the ball in the first half at the Matador Soccer Field on Friday, September 26, 2014 in Northridge, Calif. With the game resulting a 1-0 loss against the Santa Clara Broncos who proved to be a strong defensive team with a 5-4 record with no losses as the Matadors press on with several offensive plays despite the Broncos 5 saves the Matadors were unable to score. (Photo Credit: David J. Hawkins/The Sundial)

Despite a strong overall performance, CSUN women’s soccer (3-6-1) took a 1-0 loss to Santa Clara (6-4-0) in Friday night’s contest at Matador Soccer Field, in one of their last non- conference tune up matches before beginning Big West Conference play.

“It seems like the last five games we haven’t got the result, but if you see the score it doesn’t reflect how the game really went,” said Sophomore midfielder Kourtney Kutscher.

The Matador’s came out strong in the first half nearly tripling the Broncos in shots on goal and producing more quality plays up front. CSUN would go on to outshoot the Broncos 14-9 at the final whistle.

CSUN midfielder Brittanie Sakajian would put up their best attempt with a near-miss header crossed from deep in the corner by forward Cynthia Sanchez.

“I love the way we’re playing, I love the things we’re doing,” said CSUN head coach Keith West, “we just have to finish our opportunities.”

The missed opportunities would come to haunt the Matadors in the second half with the Bronco’s Sofia Huerta coming through on a long run in the 59th minute to earn the only goal for the contest. It would take time for the Matador squad to re-build it’s energy following Santa Clara’s score, but the effort came too late in the contest to produce an equalizer.

“The only thing we can improve is quality around the goal” said Matador goalie Jovani McCaskill  in response to the team’s upcoming conference schedule.

This is the second-straight match McCaskill has started in, with a total of five saves between the two.

One more away game lies between the Matadors and their conference schedule kicking off at 4 p.m. at LMU.

Then it’s back on the road the following week for CSUN women’s soccer as they meet their first two Big West Conference opponents UC Santa Barbara on Oct. 3 and Cal Poly two days later.