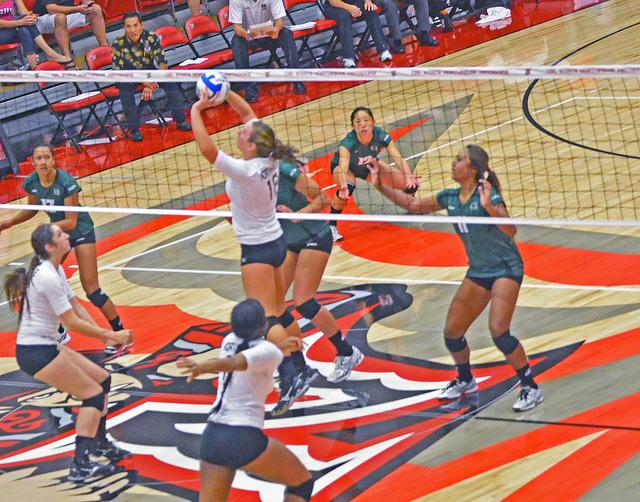 The Matadors opened Big West Conference play undefeated this weekend, with two victories including a five set bout with UC Irvine and a sweep of Cal State Fullerton.

Come from behind victory against University of California Irvine Anteaters

After being down two sets, the Matadors (11-3, 2-0) made a comeback and defeated UC Irvine (10-6,0-2) during their second Big West game of the season on Saturday night.

The game, which went on for five sets, was led by Cieana Stinson and Danetta Boykin with 15 kills each.

Casey Hinger was not too far behind with 14 kills, 16 digs and 5 blocks. Sam Kaul added 10 kills and hit a .474 while Natalie Allen put up eight kills, seven digs and four blocks.

Steffi Miller was also a large staple in Saturday’s victory as she issued out an impressive 53 assists.

The UC Irvine Anteaters forced the Matadors to play harder after defeating them in the first two sets (25-23 and 25-15).

The Matadors stepped up to the plate and took control of the third and fourth sets.

A kill by Hinger solidified a four-point lead (20-16) that continued to increase until the end of the set at 25-16.

The fourth was even better as the Matadors stayed in the lead throughout the entire set. The Matadors’ lead got up to 7-points after a 4-1 run that brought the score to 17-10.

For a while, the Anteaters seemed to be going kill-for-kill with Matadors but that was not enough for them to take the set.

The set was finished off with few service errors by the host Anteaters, 2 kills by Hinger and an Allen/Stinson co-block that resulted in a 25-16 victory.

The deciding fifth set was a close one, as neither team was able to maintain more than a 2-point lead.

The Anteaters’ first two-point lead of the set came after back to back kills from their freshman outside hitter, Cassidy Pickrell.

The Matadors answered back with two back-to-back kills from Hinger and an ace from Kelcie Randazzo that brought the score to 8-7.

The set continued to go back and forth until two consecutive kills by Stinson and an ace by Allen sealed the Matadors’ win at 16-14.

On Saturday, Oct. 4 the Matadors will be making their next stop to the Walter Pyramid to play against Long Beach State starting at 7 p.m.

Celebration is in order for the Matadors as they swept the Cal State Fullerton Titans (6-8, 0-1) during the Big West opener on Friday and gave Head Coach Jeff Stork his 200th career win.

Out of his 200 winning games Stork, who has been coaching for 13 years, he has won 178 of them with the Matadors.

Friday’s game was a true team effort as the Matadors collectively put up 17 kills in the beginning of the first set.

Sam Kaul started off the team’s killing spree by making the first two kills for the Matadors with the assistance of Steffi Miller.

The set seemed like it was going to be a close one, until an ace by Casey Hinger and a kill by Cieana Stinson gave the Matadors the lead they needed at 16-12.

Eventually, the Titans caught up during a 6-3 run. The lead was cut down significantly and stayed that way until the end of the set.

The set could have gone to either team toward the end with the Matadors in the lead by 24-23. Thanks to a kill by Danetta Boykin, the Matadors took the set 25-23.

Boykin kept the momentum going into the second set by putting up the first two kills for the Matadors, who ultimately dominated the rest of the set.

The Matadors had a 5-point lead of 18-13 after a 5-1 run thanks to a few errors made by the Titans and two kills and a co-block by Kaul.

The Titans were able to catch up after a 4-1 run that brought the score to 19-17 but that was not enough to keep the Matadors from winning the set.

The second set concluded with a 6-0 run in the Matadors’ favor. The set ended with a score of 25-17.

The third and final set had a beginning similar to the first with Kaul getting in the first two of the Matadors’ kills.

The Matadors held an eight-point lead for a portion of the set. That lead was held for a few plays after a few kills were made by Stinson and Natalie Allen.

Boykin and Casey Hinger led the Matadors during their opening game with 13 and 11 kills respectively. Boykin also racked up two aces while Hinger completed seven digs and two aces.

Kelcie Randazzo had a match high of 17 digs and added two aces while Stinson racked up 9 kills.

Kaul, who hit a .353, ended the game with a total of eight kills and two blocks.

The Matadors are set to play their next game against UC Irvine tonight at 7 p.m.