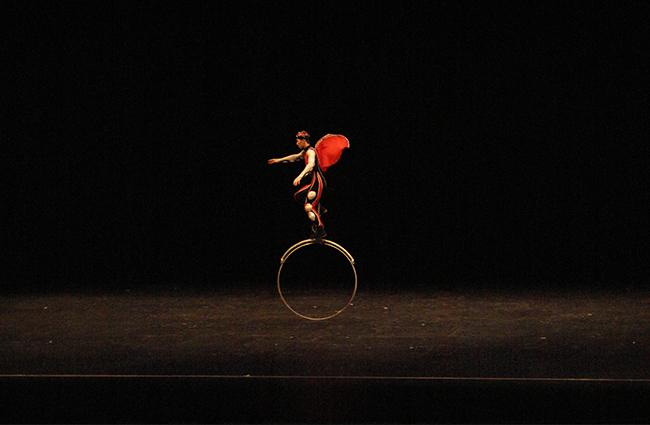 The lights dimmed and triumphant music began as the performers from The National Acrobats of the People’s Republic of China joined the VPAC stage to perform Cirque Peking.

The company was founded in 1951 and has since featured famous acts such as plate-spinning, juggling, contortion-ism and more.

The evening was filled with an impressive and titillating performance, despite its flawed soundtrack which often experienced difficulties due to low track quality.

The opening act was a well coordinated routine. Performers dressed in vibrant red and yellow costumes used drums as props in their juggling and also as instruments for background music.

The use of tribal drums as props was accompanied by break-dance like moves and poses.

Followed by the drum dance was a smaller performance featuring the use of uni-cycling.  Three men in outfits strongly resembling the evil monkeys from “The Wizard of Oz” rode onto the stage on unicycles nearly 10-feet high.

The trio of male unicyclists left the stage and were replaced by a team of women in sparkling pastel costumes on unicycles who incorporated can-can moves into their act. Even more exciting was the act that followed.

In a tribal atmosphere of red and orange light, a woman balanced on a narrow beam, jumped into a split in mid-air, then landed onto the beam again.

A more provocative performance was that of the contortionist. A woman dressed in nothing but nylon wrapped her body tightly into a neon green net. The crowd cheered as she bent both her elbows and legs backward in the net.

While the intricate moves of the female contortionist were intriguing, no one could contest the sheer awe-factor from the wooden chair act.

The audience watched in anticipation and fear as a female performer stacked then climbed nearly 10 chairs all by herself as she balanced her upside-down body on one hand.
Overall the show was well-choreographed and featured unique and interesting acts and tricks executed well by talented performers.