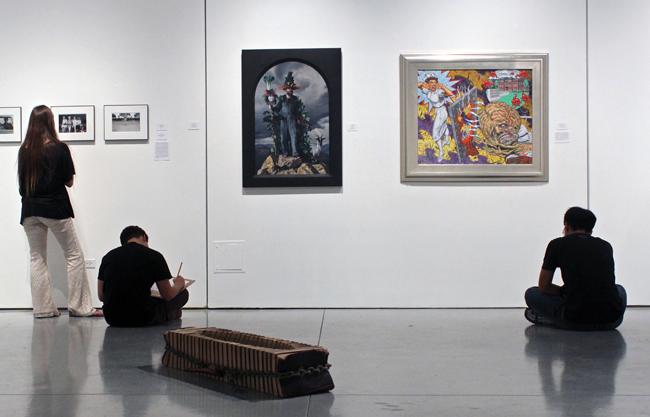 During a field trip, students who attend Northridge Academy High School take notes as they observe the artwork that decorate CSUN's Art Gallery. The exhibit "Valley Vista: Art in the San Fernando Valley" examines for the first time the contribution of the San Fernando Valley to Los Angeles’ art history. Photo Credit: Lucas Esposito / The Sundial

For Southern California residents, the idea of the San Fernando Valley doesn’t usually coincide with the idea of a rich, artistic and cultural community.

It may relay the thought of the mysterious “valley girl” of the 90s with her gum popping, “like” saying demeanor, or it may conjure the thought of chain restaurants and mini malls.

Whatever it’s connotation is, an ongoing exhibit at the CSUN gallery seeks to dispel the culture-lacking valley myth and shines light on the social and artistic identity that has been cultivated in an area that is so commonly overlooked.

“Valley Vista: Art in the San Fernando Valley, ca. 1970-1990,” currently on display at CSUN’s main gallery, is an ode to the Valley as being a significant contributor to the renown Los Angeles art scene of the 70s and 80s.

At a panel discussion on Saturday, artists discussed the Valley’s lackluster reputation, what it was like living in the area and attending CSUN during its formative years.

In 1975, Judith Baker, a member at the panel, left the San Francisco Art Institute in search of a more financially feasible setting.

“The joke was that PhD’s were bartenders in San Francisco,” Baker said. “So, we came to LA.”

After moving to LA, she lived amongst other artists in a loft, with no heat or showers.These were the early stages of what ended up being the “Artist-in-Residence” type housing that spawned many great Los Angeles based artists.

Baker’s piece, “Valley View,” focuses on the “cityscape landscape,” as she calls it. After driving through the mountains, the Valley and across the 405 freeway, Baker realized the valley had had an effect on her as much as any other setting she had lived in.

Her work, “Valley Vista” is a multidimensional painting that depicts a rolling highway that inevitably leads into a sea of urban sprawl. The road and it’s accompanying hillsides protrude out creating spacial awareness and vastness. The subdued colors give a feeling of calm disenchantment and ordinariness.

Baker said the piece reflects “the feeling of claustrophobia and expansion at the same time,” which the San Fernando Valley often evokes.

Barry Markowitz, the most talkative member of the panel, fondly recalled his time as a student at CSUN.

“I was here during the highest point in the creative community that the school enjoyed,” Markowitz said.

He was a student in 1972 when San Fernando State College changed to California State University Northridge.

“My experience here from early on after moving from New York, was very nourishing,” Markowitz said. “This became a place where you could work and very few people would criticize.”

Markowitz’s sculpture in the gallery, is composed of clippings of classic art and sharp glass microscope slides all formed into what appears to be a boat flowing over a rolling wave. The water of this wave is a mosaic of clippings from various artists, including Paul Cezanne, a  prominent French post-impressionist painter if the late 1800s. Markowitz’ sculpture gives its viewer a unique and dangerous experience.

“By using microscope slides it made it more possible that you could cut yourself than not,” Markowitz said.“You can bleed on a Cezanne,” he said with a mischievous smile and laugh.

During the panel discussion Markowitz praised the sculpture work of Gary Lloyd, saying he had a way of “formalizing materials into sculptures.”

Lloyd’s piece “Chomsky’s Vessel” lies on the floor of the opening room in the gallery. It is a lineup of a complete Encyclopedia Americana set, all leather bound and held tightly together by a heavy metal chain. In the center, a boat-like shape is carved from the paper of the books. The positioning of the piece, low to the ground and sporadically placed, makes it an intentional focal point and potential tripping hazard for the unfocused gallery goer.

Markowitz and Baker were joined on the panel by artist Jeffrey Vallance and curator Damon Willick, a Loyola Marymount professor.

They sat in front of the painting “Sand Canyon Road” by Bruce Everett, a former CSUN professor. The expansive photo-realist painting that shows a highway road climbing a mountain and aiming towards a blue sky was made with such accuracy and simplicity that it could easily be mistaken as a large photo print.

It was this painting that inspired contributing artist and former San Fernando State College student Stuart Rapeport’s piece, “The Right Tool for the Job.”

This sculpture features seven unique paint brushes made to insinuate the job they’re intended for. Rapeport said he envisioned Everett having a separate brush for every photo-realist stroke so he wanted to create his own set of specific tools.

“I was making fun of his precision and my sloppiness,” Rapeport said.

According to Willick, the exhibit not only explores Valley culture but also includes many works with humor as their backbone, such as Rapeport’s piece.

“A lot of times in art when you involve humor people don’t take it seriously,” Vallance said.

“Every moment has a different layer. If you’re doing art about life you must involve humor because it’s a part of life.”

“Being from here you’re very sensitive to the stereotype that there’s no culture here,” Willick said. “The valley often gets short changed.”