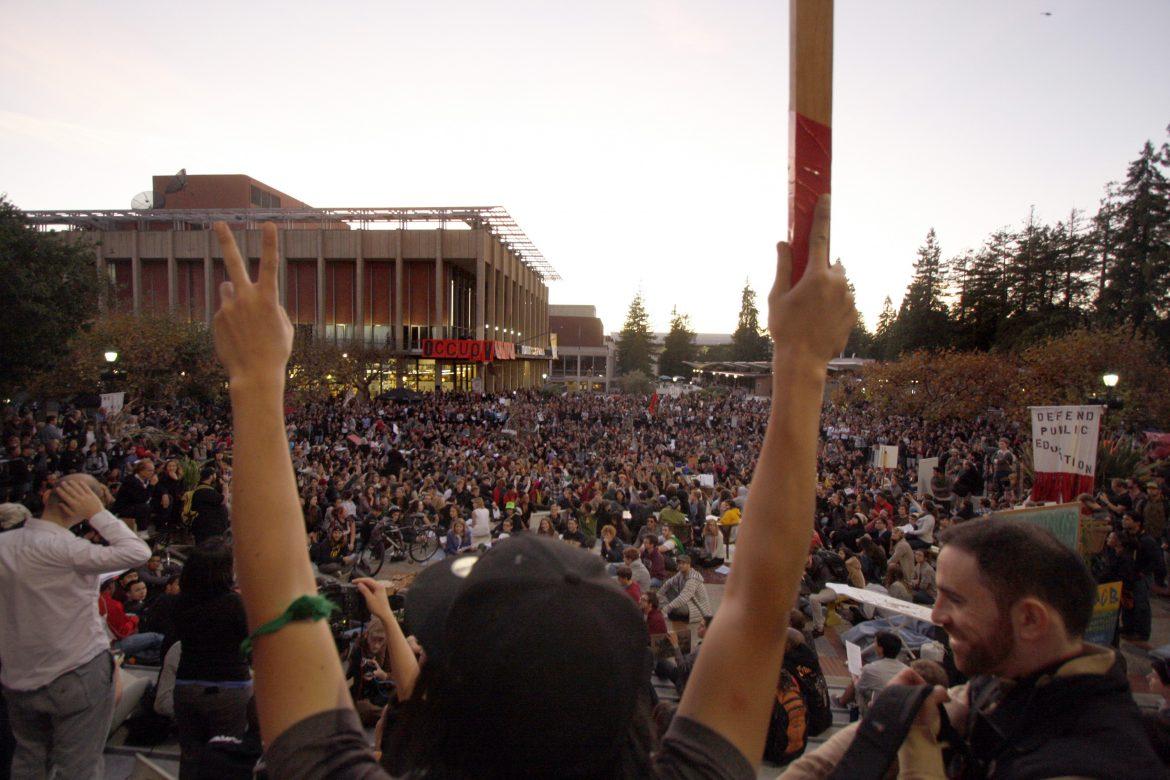 Even the efforts of the Occupy Movement and their arrival to Berkeley in 2011 could not bring the same change that the Free Speech Movement achieved many years ago. / Courtesy of MCT

In the beginning, there was the idea that “power” was with the people. Social change was to be the defiant byproduct created by swaths of citizens collectively creating a larger voice. This aim would make the dominant institutions tremble into submission. Those were days of hopeful visions of civil and social equality.

We’ve fallen short in hindsight. Today there appears to be a fracture in the foundation that those students of the 1960’s fought for us on college campuses, and there is no better time than now to make a stand.

This academic year marks the fiftieth anniversary of the Free Speech Movement (FSM) at UC Berkeley where sit-ins and other forms of social disobedience began to gain traction. This movement was thought to be the beginning of something great, to promise a future of equality and merit for hard work.

Yet even after all of FSM’s progress, their efforts seem counterproductive in hindsight, allowing dominate institutions to mature new agents of control populations.

The problem isn’t that our state’s financial aid program has a window of opportunity the size of a small chimney hole. The problem is our way of thinking.

Those who helped conceive the FSM movement were looking to challenge the powers on an unparalleled scale. While they may have seen success in the years to follow, it was always just going to be a matter of time until those in positions of power found a way to exploit those tactics.

According to College Data, the average CSU student leaves school $14,744 in debt upon graduation. To compound these problems the CSU system has seen tuition increase nearly three-fold since 1992.

And while there are more students than ever on our campus this semester, this should also mean that there must be a king’s ransom available to fund quality education – and by quality education I don’t mean parking lots and extracurricular facilities.

Not only should we be encouraging state-of-the-art facilities and technologies. We should also be standing up for those who share experiences and interface with us the most, teachers. Ultimately, it’s their stories that give us seasoned tales of our chosen professions, their challenges that make us better in our fields and their advice that helps us make informed career choices. If we can’t stand in solidarity with them, then we’ve been had; hook, line and sinker.

But it’s not teachers holding the institution up, they do more heavy lifting, hands-on development than anyone on campus. Could voicing our opinion regarding mishandlings of funds as well as questionable salary appropriations be a lost cause? I think not.

We’ve entered an age where our freedom of speech isn’t limited to long days of hitting the pavement to hand out pamphlets and leaflets, attempting to gain empathy towards a righteous issue at hand.

Now you can get involved in passive-aggressive ways for the armchair activist on social media platforms like Twitter or Facebook. You no longer need to sit down at the kitchen table to scribble out a disgruntled handwritten letter to your local congressman or congresswoman. Just e-sign an online petition on your smartphone.

Nonetheless, there’s an unexpected hindrance to these modern-day conveniences; the easier it is to participate, the more lackadaisical individuals will be to get involved. This self-doubt and individual regulation is perpetuated by Big Brother and the powers that be.

Scare tactics are becoming more rampant in peaceful demonstrations at home and abroad, with the good ol’ U.S. of A. being no exception. So on a college campus where we are, without a doubt, more protected than any other stage in society, why have we grown quiet?

It’s time to start asking for more, to hold those above us responsible for the great power that they wield. Isn’t that exactly how we’re taught from our instructors? Is this not the inquisitive mentality that our best teachers instilled in our heads? Or have we chosen to be the sad product of lethargic and mind-numbing standardized testing?

We’ve come here to succeed, to get a quality education, to get jobs that pay a decent living wage. But with a sad assumption that all of this could be some toxic Stockholm syndrome response to modern education’s constraints, how much are you willing to put on your plate to graduate? Surely mounting student debts aren’t worthwhile if there isn’t a job at the end of the rainbow, right?

Arriving at the fiftieth anniversary to such a pivotal movement, it’s time to break the digital molds. Search for issues that you find intolerable and get educated. Grab your sharpies, make posters and attend meetings with like-minded individuals. Just do something!

Now is as good a time as any, with more students’ voices to demand change – at least that used to be the case. Make a positive stance on issues that affect you and your community.

The avenues are available to begin these discussions. Just earlier this month the CSU Chancellor’s Office and Associated Students even held an open forum to discuss the allocation of our collective $108 student success fees; but how many attended or even knew about this opportunity?

If we can’t get motivated by our bank accounts, then maybe we lost that flame that was ignited 50 years ago. It’s up to us to make sure that those monumental efforts of the 60’s won’t be seen as a funeral pyre, but another match in the book.